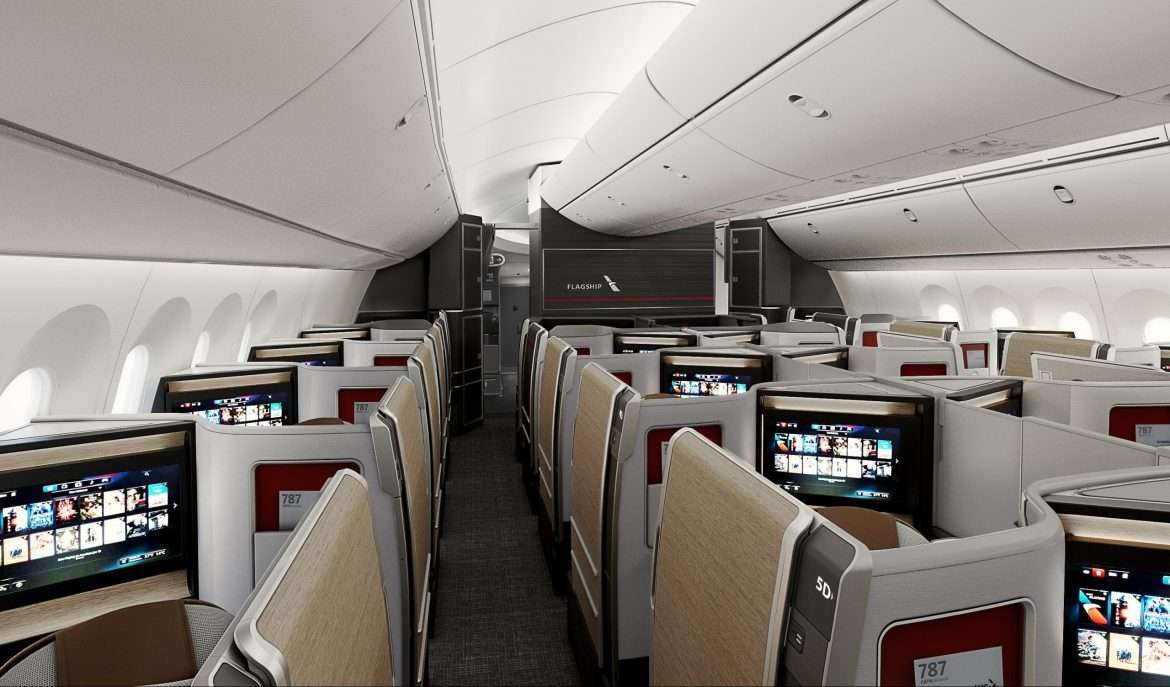 Today, American Airlines has finally revealed its brand new business class seats, called the Flagship Suites as well as Premium Economy seats. These new seats will be introduced on long-haul flights starting in 2024.

There will actually be two different types of Flagship Suites debuting for American Airlines. As of 2024, newly delivered Boeing B787-9s and Airbus A321XLRs will feature these new seats while the current Boeing B777-300ER fleets will be retrofitted with the new seats.

Moreover, new premium economy seats have also been revealed and they will be also installed on the brand new Dreamliners as well as A321XLRs.

Sadly, the ‘Real’ First Class seat on the B777-300ERs has a high chance of getting eliminated as the new business class product will replace them.

American Airlines chose the all reverse herringbone option in which the middle seats do not form into a bed like Qatar Airways. The Flagship Suites on B787-9 come with privacy doors too.

The Flagship Suites on B787-9s are manufactured by Adient Aerospace’s Adient Ascent product. And based on the photos American Airlines released today, it is very similar to Qatar Airways’ Qsuite 2.0 installed on its B787-9 fleets.

Adient Ascent seats are also planned on Hawaiian Airlines’ upcoming Dreamliners in 2023. The advantages of this seat are it is highly modifiable depending on the airline customers. For example, the seats can be configured in staggered and a mixture of reverse herringbone and herringbone layout.

The seats offer expansive personal surfaces and storage areas that can be utilized to store or place personal belongings. The center seats are great for couples who travel together as they can dine together and share spaces.

This is probably the most anticipated among everyone including myself. American Airlines also revealed its business class and premium economy cabin and seats on the Airbus A321XLR fleet and it looks gorgeous.

Currently, American Airlines has 50 Airbus A321XLRs in order and the first aircraft is planned to be delivered starting early 2024. The A321XLR will feature 20 Flagship Suites in 1-1 configuration and 12 Premium Economy seats in 2-2 configurations.

The Flagship Suites on the A321XLR will be herringbone seats with privacy doors, nearly identical to Jetblue’s Mint seats. But we are still unaware if the first row will be different from Jetblue’s Mint Studio. I am hoping American Airlines also install some special seats.

As I mentioned earlier, American Airlines not only revealed brand new Flagship Suites but also revealed a brand new Premium Economy Class and seats. The Premium Economy seats are similar to Delta’s Airbus A220 First Class designed by Recaro seats.

American Airlines B787-9 Premium Economy will feature 32 seats, 11 more than the current B787-9 fleet. The seat provides headrest wings to increase privacy and larger IFE screens.

In a press release, American Airlines plans to refresh existing Airbus A321Ts and Boeing B777-300ERs to align with the brand new aircraft. Starting in late 2024, 20 B777-300ERs will be retrofitted with the new Flagship Suites where there will be a total of 70 Suites and 44 Premium Economy seats as a result.

For the existing 16 Airbus A321Ts, American will also install the new suites and will continue to offer lie-flat seats on its transcontinental routes departing New York and Boston along with its Northeast Alliance partner, JetBlue Airways.

This means all the First Class cabins will be gone for good and the era of “Business Suite” will begin in the US.

American Airlines, today, revealed brand new Flagship Suites and Premium Economy seats that will be installed on brand new Boeing B787-9s and Airbus A321XLR which will be delivered starting in 2024. Unfortunately, these new seats will mark the end of International First Class seats in America’s fleet.

The brand new Flagship Suites on B787-9 will be similar to Qatar Airways Qsuite 2.0 featuring a privacy door and enhanced seat appearances, while the suites on A321XLR will be like Jetblue’s Mint suites.