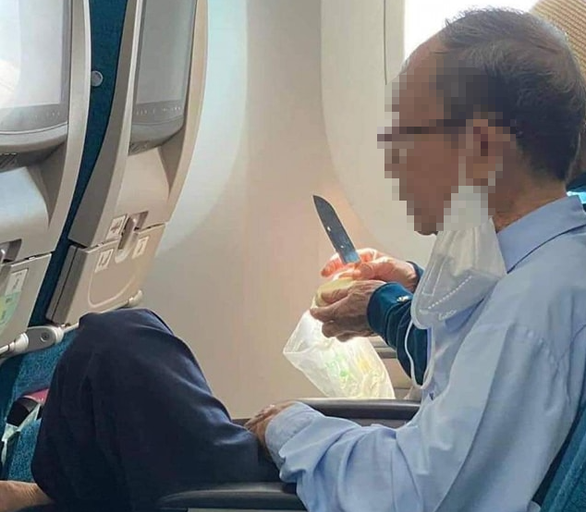 The world is wide and there are many strange people. A few days ago, a picture inside the aircraft went viral as an elderly female passenger on board managed to bring a paring knife with a blade around 20cm in length.

The incident occurred on board Vietnam Airlines flight VN208 from Ho Chi Minh City to Hanoi as the elderly passenger carried a paring knife and started to peel fruit during the flight. A neighboring passenger noticed this and immediately notified the crew members and the knife was confiscated right away.

Current aviation regulation prohibits sharp items including a razor that is more than 6cm in length but the passenger somehow managed to carry this knife into the aircraft. If caught passengers will face up to 7 to 10 million Vietnamese Dong (Between US$300 ~ US$450) in fine.

With the issues surfacing, the Civil Aviation Authority of Vietnam has written a statement to every airport in Vietnam to carry out stricter screening of passenger and their belongings.

This security screening incident is currently not the only issue rising in Vietnam. There are other safety concerns by passengers. As Tiktok is famous in Vietnam to share videos, thoughtless passengers are emerging more and more posing a threat to aviation safety and security.

Last week, a female passenger went as far near to the taxiway at Phu Quoc International airport to take a dancing video dangerously close in front of a taxiing Vietnam Airlines aircraft. The airport security officer noticed her action and immediately requested her to return to a safe location.

Another incident was a couple taking a Tiktok video away from the boarding stairs behind the wings while another passenger was stopped by the crew members as he/she was taking a video of the sky by sticking the phone at the window. This might not sound dangerous but sometimes due to excessive heat from the sunlight, the mobile phone could heat up and explode.

Vietnam’s Civil Aviation Authority is currently asking airlines to collect information on these unruly passengers and will impose fines and even flight bans. Here’s a statement from CAAV:

“If the above incident happened after the Civil Aviation Authority of Vietnam issued the Directive to strengthen supervision and proactively prevent violations of aviation security (July 15, 2022), we will consider the behavior to prevent violations of aviation security. handle. Because the clip was shot by a passenger on the plane, only one angle, not a full view, so it is necessary to review the cameras on the airport to see the situation clearly, then evaluate the behavior of the young couple in the clip.”

Representative of the Department of Aviation

As travel is getting freer, people are getting excited to visit. But being too hyped and imposing safety concerns are something they need to control. Let’s see how Vietnam will fix these issues over time.