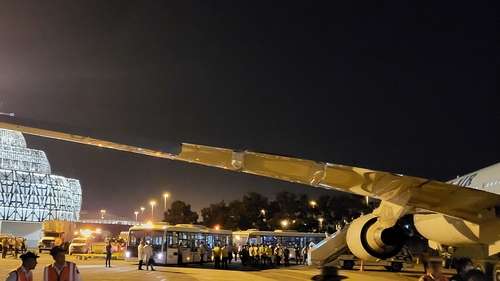 On Saturday evening, Korean Air that departed from Istanbul, Turkiye made an emergency landing in Baku, Azerbaijan after a defect was found in one of its engines.

The Incheon-bound KE9956 operated by 11 years old Airbus A330-200(HL8228) with 215 passengers and 10 crew members aboard landed at Heydar Aliyev International Airport in the capital of Baku, less than 2 hours after taking off from Istanbul at 6:25 pm on Saturday (local time).

Information We Know So Far:

As of now, Korean Air stated that there was a vibration sensor message emerging from the No. 2 engine on the right. The captain immediately notified the passengers of the issue and diverted to an airport in the closest vicinity which happened to be Baku, for the emergency landing.

There are videos on social media that appeared the aircraft was slightly banking to the left, the cabin lights flickering and the IFE systems not functioning while the aircraft was diverting. Some passengers reportedly saw sparks coming out from the right engine and felt the vibrations and noise.

Thankfully, the captain’s wise decision to divert contributed to no injuries and passengers were safely transported to a nearby hotel. The airline will dispatch an Airbus A330-200 to Baku to transport back the stranded passengers back home. It is scheduled to land in Seoul around 7 am on Monday.

So Why Is Vibration Sensor Important:

Aircraft vibration is something not to be neglected. If parts aren’t balanced correctly, it can weaken mechanical structures and loss of engine performance. If left ignored and unrepaired, this can contribute to metal fatigue, cracked turbine, fan and compressor components which could lead to potentially catastrophic engine failure. This is why monitoring aircraft vibrations is one of the most important aspect for pilots and mechanics.

Currently, the affected aircraft is under maintenance at Baku. Experts are still uncertain about the cause but I will share with you if there is updated news about this incident.