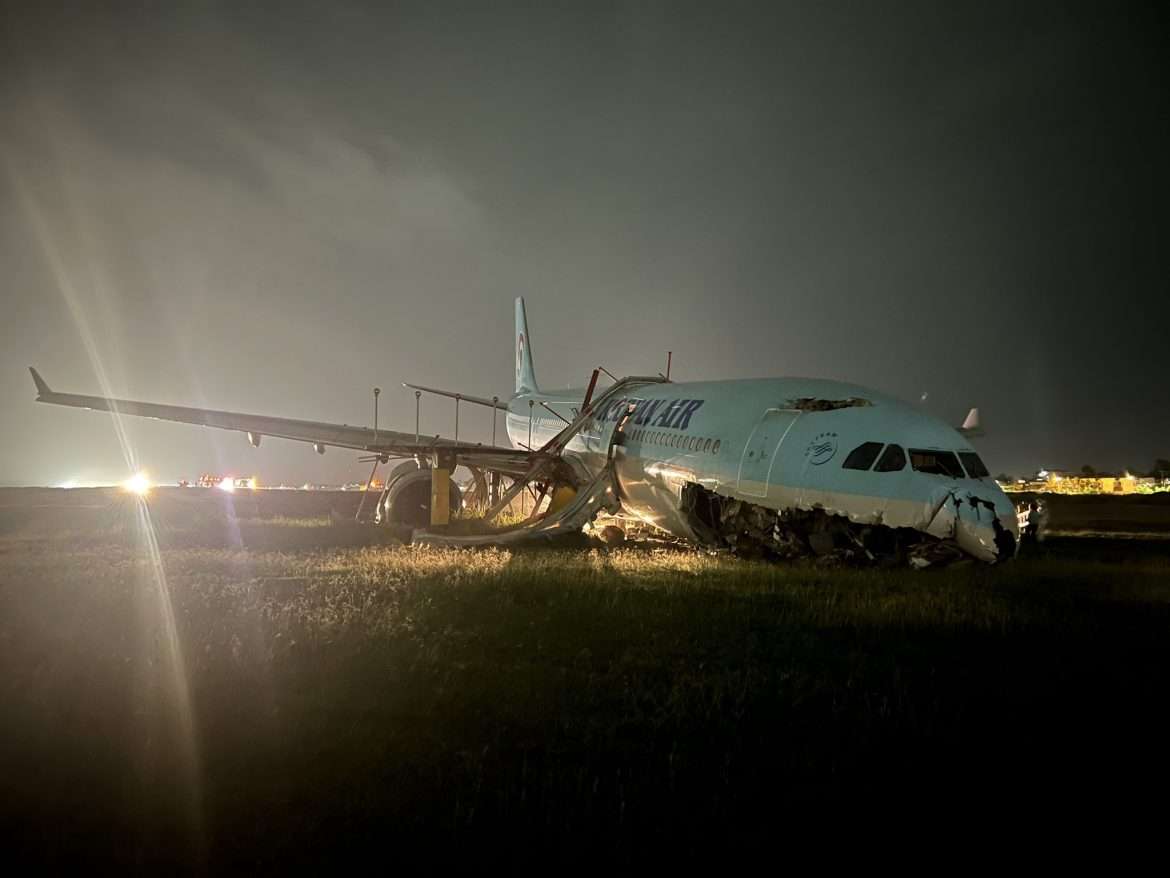 A Korean Air Airbus A330 suffered a runway excursion late evening yesterday after landing at the Philippines’s Cebu International Airport in heavy rain.

Korean Air A330 Skids Off Runway After Landing

The incident involved on Sunday, October 23, 2022, with the aircraft registered as HL7525, a 24-year-old Airbus A330-300. The aircraft was operating as KE631 from Seoul Incheon (ICN) to Cebu Mactan International Airport (CEB).

The flight went as planned for 3 and a half hours before descending towards Cebu. However, the weather in Cebu on Sunday evening was poor with a combination of heavy rain with low visibility. As a result, the aircraft failed to land at Cebu twice, instead, the pilots chose to perform go around since they were not able to land safely.

After two failed attempts at landing, Korean Air went into a holding pattern for 40 minutes hoping the weather at Cebu will get better. With the delay passing an hour mark, pilots on Korean Air gave the third try given that they were already flying an hour more.

On the third attempt, Korean Air KE631 successfully touched down at the runway but due to the condition of the runway, the aircraft failed to brake and overran the runway until it came to a stop at the hillside.

The Cause of the Accident On Korean Air KE631

It is too early to know the cause of the accident as the aircraft is still believed to be sitting at the end of the runway with substantial damages on the airframe. The accident is currently being investigated by the local Aircraft Accident Investigation Board (AAIB), CAA and Korean Air and the details are limited for now.

A passenger, who was on board the flight posted on Twitter that prior to landing, the captain has informed passengers to prepare for an emergency landing.

Korean Air updated on social media regarding the accident. Keehong Woo, President of Korean Air, made an apology statement:

I would like to extend my sincere sentiments regarding the Korean Air Flight KE631 incident at Mactan-Cebu International Airport on October 23, 2022.

A thorough investigation will be performed together with the local aviation authorities and Korean authorities to determine the cause(s) of this event.

We always prioritize safety in all of our operations, and we truly regret the stress and inconvenience brought to our passengers.

We remain committed to standing behind our promise of safe operations and will do our very best to institute measures to prevent any recurrence. Our overall goal is for our valued guests to trust that Korean Air will treat them well, and honor us with the opportunity to welcome them once again.

You can check out the video on daytime taken this morning.

No Injuries Or Fatalities

Although the aircraft sustained substantial damage, thankfully, there were no major injuries or fatalities reported. Local media outlets are reporting that the passengers were evacuated and taken to a nearby hotel for further assistance.

After the incident, Cebu International Airport still remains closed and the majority of flights are canceled or diverted to nearby airports. Cebu has two runways but the second one is still under construction and the approach lighting system or ALS is the first runway seems to be damaged by Korean Air so I don’t think the airport will reopen soon.

A Korean Air flight KE631 that was operating from Seoul Incheon to Cebu skidded off the runway after landing under bad weather conditions. Thankfully, there are no reports of major injuries or fatalities but the 24-year-old aircraft is damaged beyond repair.

Korean Air has been experiencing a big or small accidents frequently this year. Even with all the advanced technologies in aircraft, this incident tells us that aircraft accidents can occur in any form.