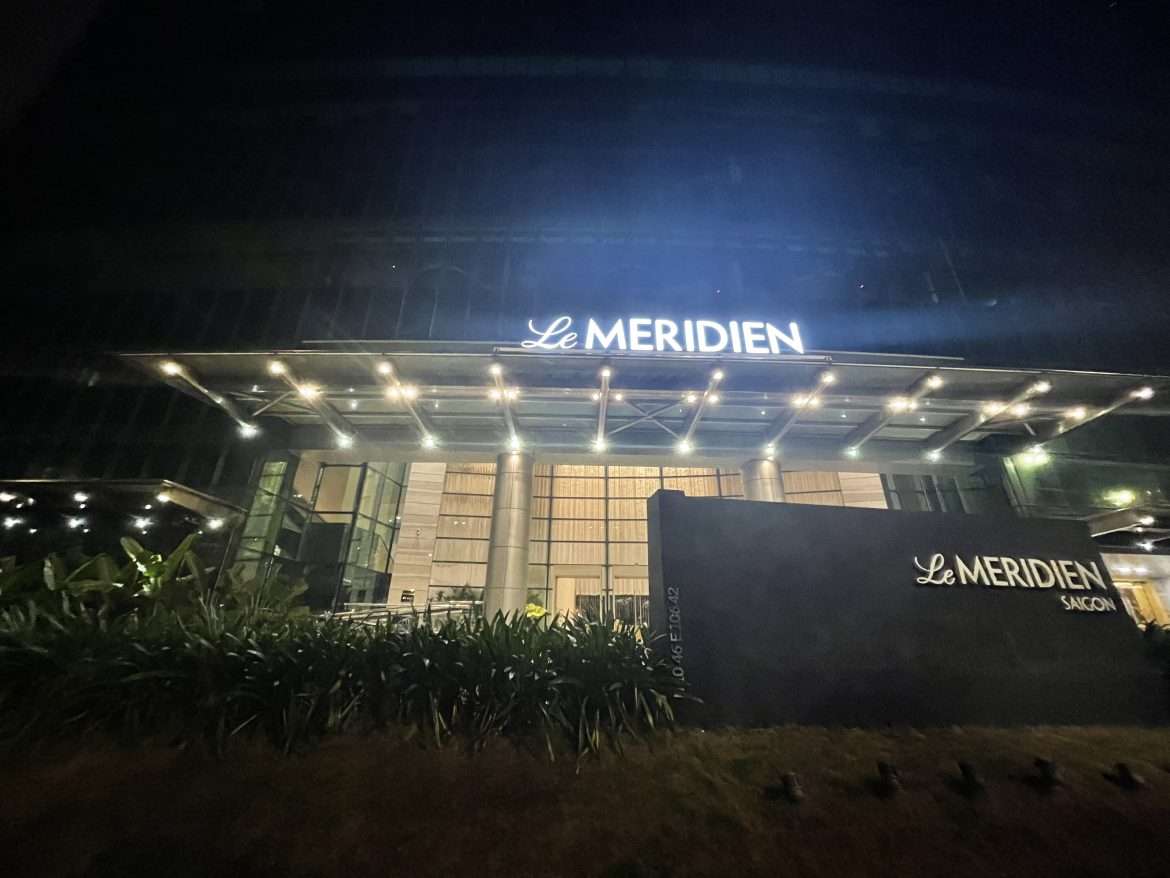 Last Sunday, I had a very tight schedule guiding my parents for their anniversary to Intercontinental Saigon and in the evening we went to watch a movie that finished around midnight. Until we came back to the room, I was still deciding in my mind which hotel I should stay at.

In the beginning, I planned to book a separate room with my parents but I was looking for some more economic way that had maximum benefit. It was kind of luck that I chose Le Méridien Saigon which was located 15 minutes walk from Intercontinental Saigon over a few other hotels (Park Hyatt and Reverie were a little far to go back and forth).

My bet choosing Le Méridien Saigon was a success with generous benefits given during check-in.

Le Méridien Saigon is one of 3 Marriott properties located along the Saigon River in the heart of Ho Chi Minh City and the fourth in Vietnam. The hotel was built in 2012 accommodating 345 rooms including 27 suites, each outfitted with signature Le Méridien amenities.

I booked the hotel 30 minutes past midnight because, until the time of booking, I was hesitating to stay either at Sheraton or Renaissance where I have not stayed before.

In the end, I decided to stay at Le Méridien Saigon but as the calendar shifted to the next day, both the Bonvoy app and website did not allow me to book the room by myself.

So I dialed the Bonvoy customer service desk for help and thankfully, the friendly representative was able to create a reservation for me. She confirmed the number of points to be deducted and for the Guest Room, I redeemed 15,200 points on a PointSaver rate.

Dropping off my parents at Intercontinental Saigon after a late-night movie, I arrived at Le Méridien around 1 AM. As I enter the lobby, the check-in staff and the general manager were expecting me as I was the only guest who made a last-minute booking and arrive at that time of the hour.

Due to my late check-in, I did not receive any Junior Suite upgrade instead a River View room was assigned to me. While not receiving a room upgrade, I received a gracious late check-out till 6 PM and Club Lounge access benefits on top of my Marriott Elite benefits.

At Le Méridien Saigon, Marriott Bonvoy Elite members can either choose a welcome point or a welcome gift which here, was a teddy bear. I had a poll on my Instagram story on which should I receive and the winner was the point. At Le Méridien hotels, you will receive 1000 welcome points that will be reflected a day after your check-out.

The elevator at Le Méridien has dual openings: One for the room and the other for the Latest Recipe restaurant, fitness, pool and ballrooms.

My room was assigned to 2024, located on the 20th floor. The room features 38sqm or 409sqft in size with wall-to-wall windows overlooking the Saigon River. The Guest rooms are sleek, contemporary, and artful with a mixture of French-Vietnamese designs.

The Guest room looks smaller on the floor plan, but it stretches all the way towards the river or the city depending on the location. The curtain is electronically operated with a switch located on the wall just beside the bed.

Since the hotel is more than a decade old now, the wooden furniture shows a few signs of aging but it’s not that visible with your bare eyes.

There are plenty of power sockets one by the bed and two by the desk.

All Guest room bathrooms have a marble layout equipped with a separate walk-in shower and a bathtub to dip, a lighted make-up mirror and a few different bathroom amenities.

Le Méridien Saigon dropped MALIN+GOETZ amenity to a brand called Linea Evergreen. I really am a fan of MALIN+GOETZ which I first learned from Le Méridien Frankfurt. Too sad it changed to something that I did not hear of😕.

The river view was amazing both day and night!

Breakfast is served at the Latest Recipe restaurant from 6 AM to 10 AM in a buffet style. There were plenty of seats available throughout the time but the buffet option was a little weak in my opinion. Nevertheless, the quality of the meal was acceptable and the fruit and salad were really fresh.

I only had a light breakfast to review the restaurant as I had a bigger breakfast appointment with my parents at Market 39, who were staying at Intercontinental Saigon.

The gym and pool are located on the 9th floor. There is a separate button in the elevator that exits to the opposite door. Both the gym and pool offer a stunning panoramic view of the Saigon River.

Once you get off the elevator, the pool entrance is located on the right side. There is also a small pool bar just beside the gym for guests to order drinks and light snacks while enjoying the view.

During the check-in, the general manager offered me to use the Club Lounge as I told him that I had a late-night departure. While I spend the morning and early afternoon at Intercontinental Saigon with my parents, I decided to invite them for afternoon coffee and dinner.

Le Méridien Saigon Club Lounge opens from 10 AM to 10 PM with a dinner buffet starting from 5:30 PM. For the rest of the hours, you can have some light snacks and drinks that can be requested by the lounge staff.

After having a heavy meal back at Intercontinental, my parents and I had dinner around 6 PM. There were a lot of guests during dinner and the lounge was almost full. Cold cuts and warm mains were replenished throughout dinner, you can also request cocktails from the lounge staff aside from different liquors displayed at the bar.

This is one of the best 15,200 Bonvoy points I redeemed so far. With an elite benefit that is almost equivalent to Ambassador status, all staff members were extremely friendly, and again thanks to the general manager for the great hospitality.

My parents also had a unique experience of hotel and lounge hopping. Perhaps, I should bring them to different hotels around the world so they can have more insight about their next hotel booking.

Definitely, this stay will make me return and stay at Le Méridien Saigon in the future. But I also have plans to try the remaining two Marriott properties: Sheraton and Renaissance nearby too!