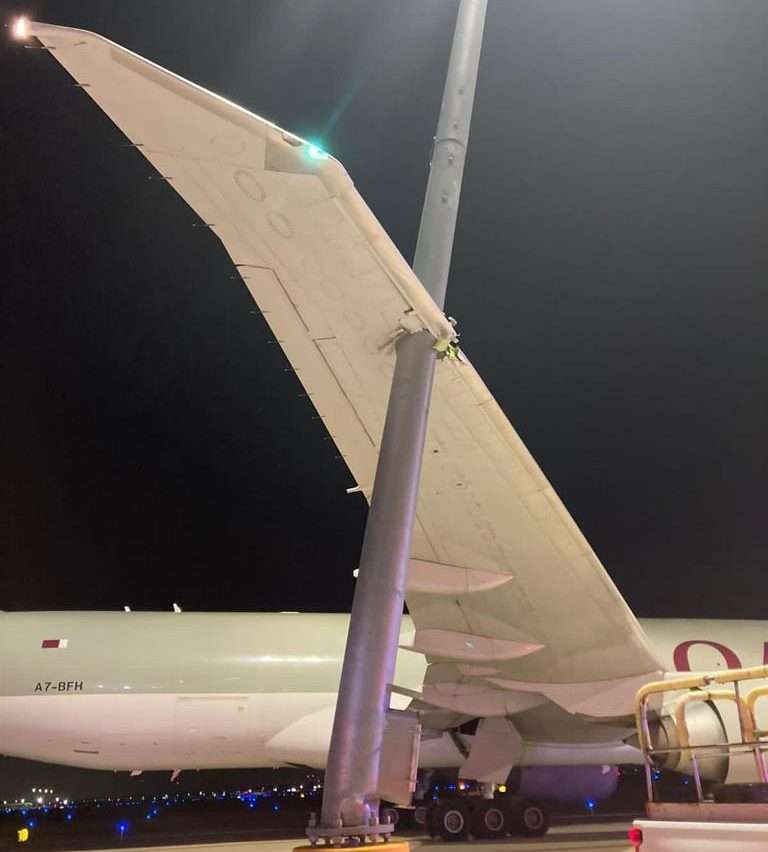 On Friday, August 5, 2022, Qatar Airways Cargo QR8141 from Atlanta to Chicago sustained significant damage to its wing after hitting a light pole while taxiing at Chicago O’Hare International Airport.

The aircraft under the registration code A7-BFH is a 7.5-year-old Boeing B777-FDZ Freighter.

What Caused Qatar Airways B777F To Hit A Light Pole?

What exactly happened and how it happened is still unknown and under investigation by related authorities. But there surely was a miscalculation or miscommunication between the ground, tower and the pilots which made the aircraft run into the pole.

Chicago O’Hare is a mega-hub with eight active runways and over 100 taxiways. Among those 100 taxiways, some of them are not wide enough to accommodate the size of widebodies, and extra space is also needed at all 90-degree turns.

In a statement, Qatar Airways confirmed the incident:

“Qatar Airways can confirm that a cargo aircraft, QR8141 operating from Atlanta to Chicago, came into contact with a light post while taxiing at Chicago O’Hare and sustained some damage to the wing. The incident is currently under investigation and we can confirm that no crew members were injured.”

In the past, there were quite a few incidents where aircraft clip its wing to a pole by a few inches due to a wingtip clearance calculation mistake. But this time, it was way towards the starboard wing leading edge.

Needless to say, the aircraft has been grounded at O’Hare since the 5th of August. Furthermore, the four pilots in the cockpit have allegedly been terminated.

Qatar Airways has sustained major damage to the right side of the wing last Friday. While this is still an ongoing story, I don’t think the aircraft will be back any time soon due to the extent of damage as it will not be an easy job to repair in a short period of time.