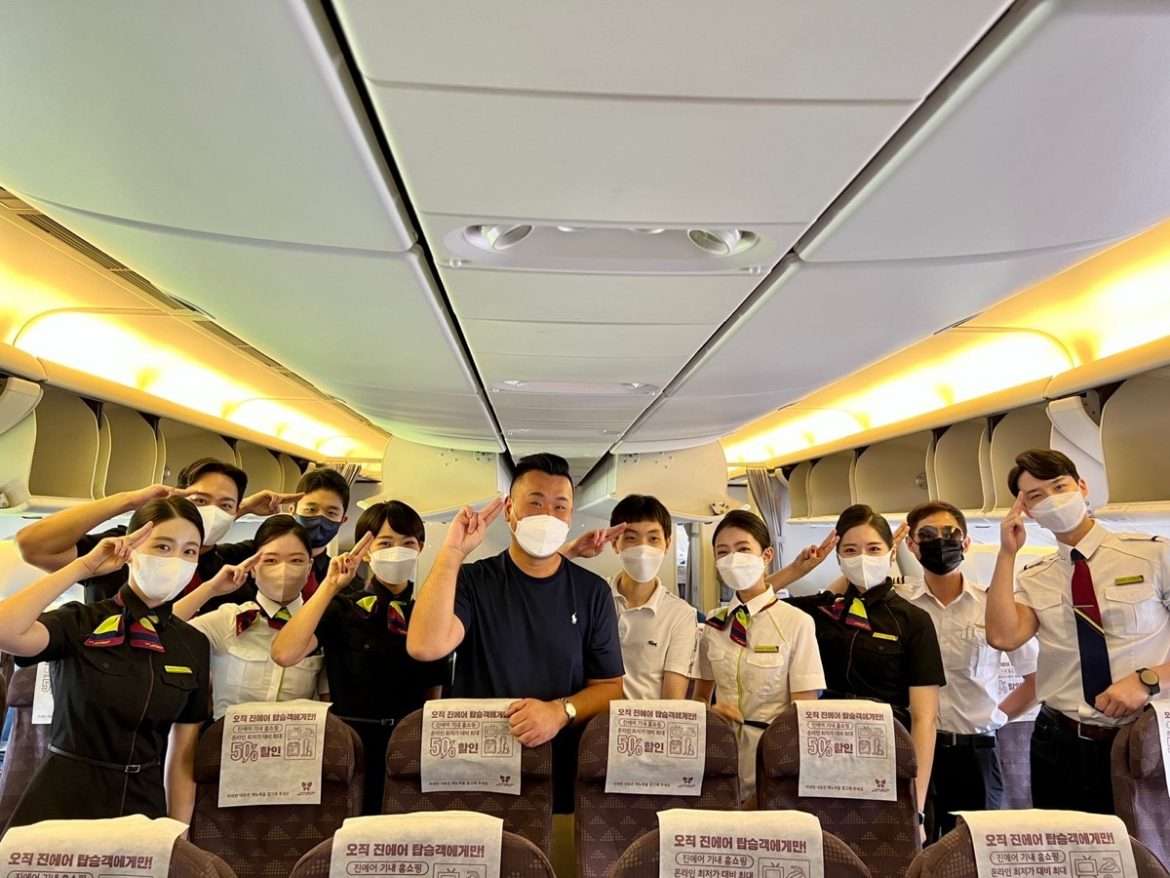 After a quick visit to Korean Air’s Domestic KAL Lounge at Gimpo Airport, Sam Chui and I headed out to the gate a little early to take some photos and videos of the aircraft at the gate. Gimpo Airport is one of the busiest airports in the world with nearly 155 daily flights and over 40,000 passengers flying on this route each day.

The majority of the time, I flew Korean Air or Asiana from Gimpo to Jeju and while I’ve flown on Jin Air’s narrow bodies on domestic routes, this was my first ever flight on Jin Air’s wide-body Boeing B777.

A Brief History Of Jin Air

Before I review my flight experience, I will go over a brief history of Jin Air.

Jin Air was founded back in 2008 as a sister airline of Korean Air’s Hanjin Group and served as a low-cost carrier (LCC) to serve regional destinations within South Korea. As the company grew, it started its first international flight to Bangkok, Thailand the following year and eventually expanded further to 36 international destinations out of four cities and 14 domestic routes from three airports.

A lot of people are mistaken about the meaning of the word “Jin” as gold in Chinese characters. However, Jin Air’s “Jin” stands for two meanings, “Truth” in Korean and “Jeans” in English which symbolize practicality. The airline wanted to approach the public with a less solid image and a more friendly and comfortable image offering practical services.

That is why Jin Air’s cabin crew uniforms are casual and trendy matched with jeans.

On domestic flights, the boarding gates usually open 20 minutes prior to departure and close 5 minutes before departure. But we had the privilege to pre-board a little early to shoot some videos on board before passengers started boarding.

As we got into the cabin, the cabin crew members warmly greeted us. Since we were the only pre-boarded passengers, I went to explore the all-economy class configured cabin.

Jin Air has four Boeing B777-200ERs with an average age of 18 years old. The aircraft were all former Korean Air fleets but were given to Jin Air to operate more capacity to popular destinations like Bangkok and Tokyo.

These ex-Korean Air aircraft used to feature first and business class but as Jin Air focuses as an LCC carrier, the airline swapped all the premium seats into economy class seats, making South Korea’s only all-economy B777.

There are a total of 393 seats on the B777-200ERs in high-density 3-4-3 configurations. The cabin is divided into two cabins: Jini PLUS and Jini STANDARD despite having six different seat zones.

Jini PLUS is equivalent to the premium economy although the seats are pretty much economy seats with wider legroom and a little more recline. These PLUS seats have a seat pitch of 36~37 inches and 19~20 inches of width while the STANDARD seats have a rather tight 27~32 inches pitch depending on the seat location.

I was seated along with Sam at Seat 28K which is sold as Jini FAST since it was one of the first few rows near the exit. The seat was a little bit cramped in terms of legroom but not bad for a 50 minutes flight to Jeju.

Jin Air has installed the call bell and overhead light button on the side of the armrest which was originally the inflight entertainment control button. I think it is a great use to replace the function instead of installing these buttons somewhere else on the seat.

While in the air, I tried a couple of different seats and the PLUS seats definitely have much more leg space. Storage space-wise, the overhead bins are large enough to store your carry-on bags and the front pocket on each seat was all for storage space.

Unfortunately, during the pandemic snack and drink services were all cut however under special conditions such as the consumption of medicines, the crew members offered mineral water to passengers.

Jin Air is slowly restoring services now by offering drinks on domestic flights however, it is still limited to mineral water.

In terms of inflight entertainment, the airline adopted a similar approach as other low-cost carriers by removing the entertainment system. There is only a literature pocket with a duty-free magazine and safety card.

What I specifically found to be funny is the design of the safety cards. Kudos to the designer who came out with these funny drawings.

There are a total of 10 lavatories given the capacity of this Boeing B777. The first three are located on the forward cabin and the remaining seven are on the mid and aft sections respectively.

Sam and I had an opportunity to review Jin Air’s Boeing B777-200ER from Seoul Gimpo Airport (GMP) to Jeju Airport (CJU). During our flight on Jin Air, the airline was deploying its widebodies to this popular route. As international travel demand increased rapidly, now these B777s are serving on international routes such as Tokyo and Bangkok.

It was a short 50-minute hop to Jeju Island but I am glad I was able to experience this all-economy widebody with amazing crew members.

Upon landing in Jeju, we went to planespot at a famous spotting location before our flight back to Gimpo on Korean Air’s Airbus A220. Stay tuned for my next flight review from Jeju to Gimpo!