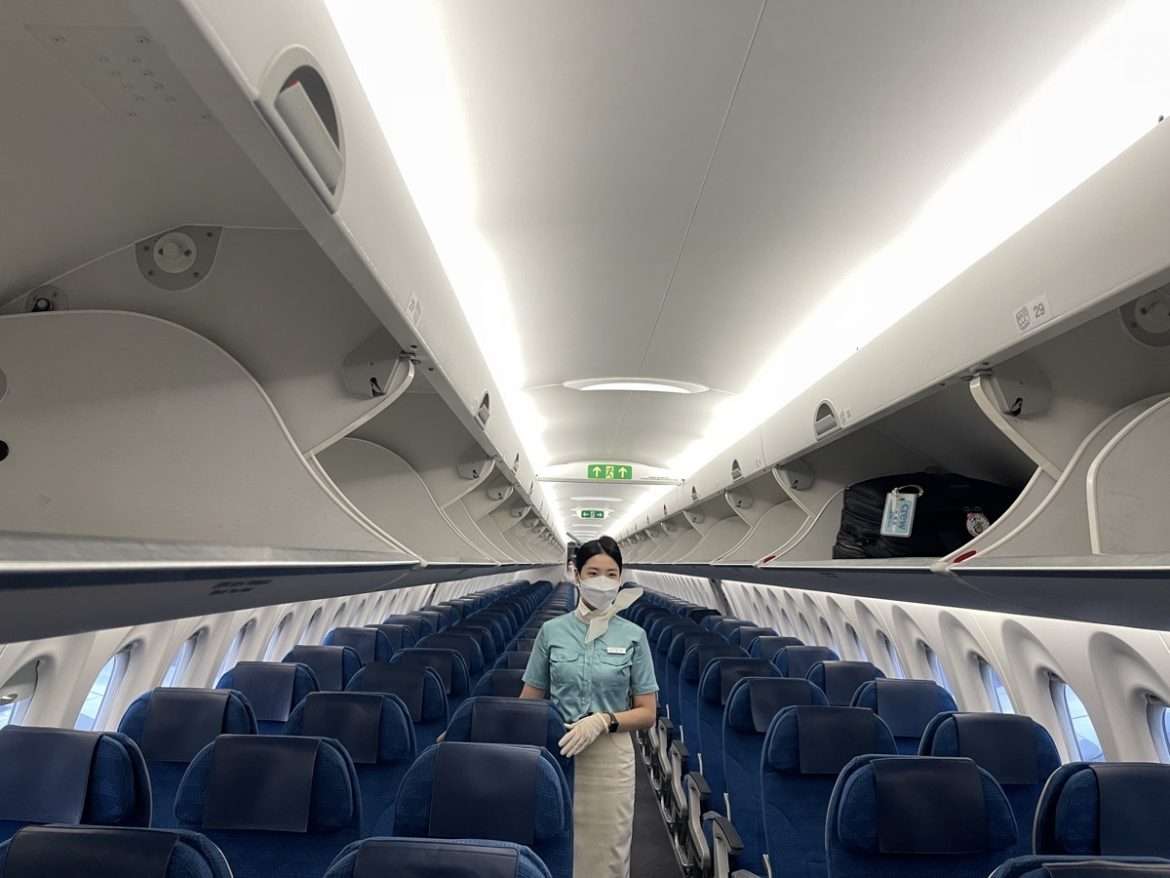 After spending the whole afternoon spotting aircraft at Jeju Airport under intense heat and enjoying the island, it was time to fly back on our most anticipated Korean Air Airbus A220.

I have flown on the Airbus A220 quite a few times including Korean Air to Busan last year, this was Sam’s first time on Korean Air’s narrowbody. Therefore, we chose one of the latest flights back to Seoul that was operating with Airbus A220.

Following our quick visit to the KAL Lounge, we then cleared security and head straight to the gate.

As noted as one of the busiest routes in the world, the Jeju domestic terminal was hustled and bustling with a large number of passengers everywhere around the airport. It resembled more of a train or bus terminal.

Our flight departed at 19:15 PM and boarding usually starts 20 minutes before but we were allowed to pre-board to get some photos and videos of the empty cabin. It always feels great to preboard and explore the aircraft before it gets packed up.

Korean Air has 10 Airbus A220s with an average age of 4.4 years and these aircraft are all configured as all economy seats with a 3-2 layout. The airline was the third A220 customer in the world and the first and only operator in the Asian region.

Being one of the youngest fleets, the cabin still looked fresh and there were no signs of aging or winks. The overhead bins are larger than most aircraft of similar size and each can store more carry-on bags.

The Airbus A220-300 has a total of 140 seats which are all economy class seats. However, Korean Air dedicates the first three rows are “Preferred seatings” which are mostly reserved for higher fare class as well as SKYPASS elites.

The seats on A220s have the same specifications but with some exceptions on the middle row seats. While the regular seats have 30 inches (76.2cm) of pitch and up to 19 inches (48cm) of width, the middle seats have a slightly wider pitch of 31 inches (78cm).

A lot of passengers try to avoid the middle seat but I guarantee middle seats on the A220s are not bad either.

Although I rarely or almost never seat in the middle seat of economy class, this time I would love to try out how wider it feels. Based on the photograph, it looks like there is no difference in the size but indeed, I can physically identify it was a little wider compared to the aisle and window seats.

Seats on the A220 has no inflight entertainment monitor instead a literature pocket is present behind the headrest and front pocket. It is a simple design intended for very short domestic flights.

The tray table on each seatback had a simple design without a cup holder. There are grooves along the edge and on the corner to place drinking cups.

Separate air vents and reading lights are located on each seat. Since there are no separate buttons on the seat to adjust the light, you’ll have to manually reach the lights to turn it on.

In addition, call bells are also located beside the overhead lights.

The A220-300 features a large oval-shaped window that offers a larger range of vision compared to other narrow-body aircraft.

As soon as all the passengers were on board, it took less than 15 minutes before the aircraft door closed, and immediately, we were on the taxiway headed to the runway. The flight was 90% full even though it was not a peak travel period. This surely shows the demand for the Seoul-Jeju domestic route to be one of the top routes.

Korean Air still does not serve any drinks or snacks on domestic routes due to the pandemic. When I talked to the cabin crew about serving drinks on board she told me that drinks are only offered on request for now and most of the time passengers request for medicine consumptions.

It is a little contrasting from Jin Air as it offered passengers drinks during our previous flight. Hopefully, the service will be restored next year.

The aircraft is also equipped with both a USB port on the seat back and a universal power socket underneath the seat.

As I mentioned above, Korean Air’s A220 also does have monitors installed on each seat instead, you can stream movies or programs through your mobile devices by connecting to the Wi-Fi on board.

This inflight Wi-Fi does not offer web browsing or chat functions but acts solely for AVOD (Audio and Video On Demand) content.

And for those who do not like to stare at their phone during the flight, you have the option to read Korean Air’s Morning Calm magazine on this short flight.

There is a total of three lavatories: One behind the flight deck and the other two in the back of the aircraft. Like all other A220s, the size of the lavatories is wide but the sinks were small. Also, having a window in a lavatory is quite awkward especially when you need to use it on the ground. It’s a little inconvenient to open or close the window shade.

Our quick day trip to Jeju Island has come to an end. Although it was a short hop, we managed to enjoy the island and fly back with one of Korean Air’s youngest fleets: The Airbus A220-300.

Korean Air is one of the airlines that offers the widest economy class seats and this was also applied to the A220 family. On top of that, the middle seats on this aircraft were wider, giving extra space to have less compact feelings.

Even though there were no in-flight services on this short flight such as a snack drink service, I was more than happy to fly the A220 on one of the world’s busiest routes.