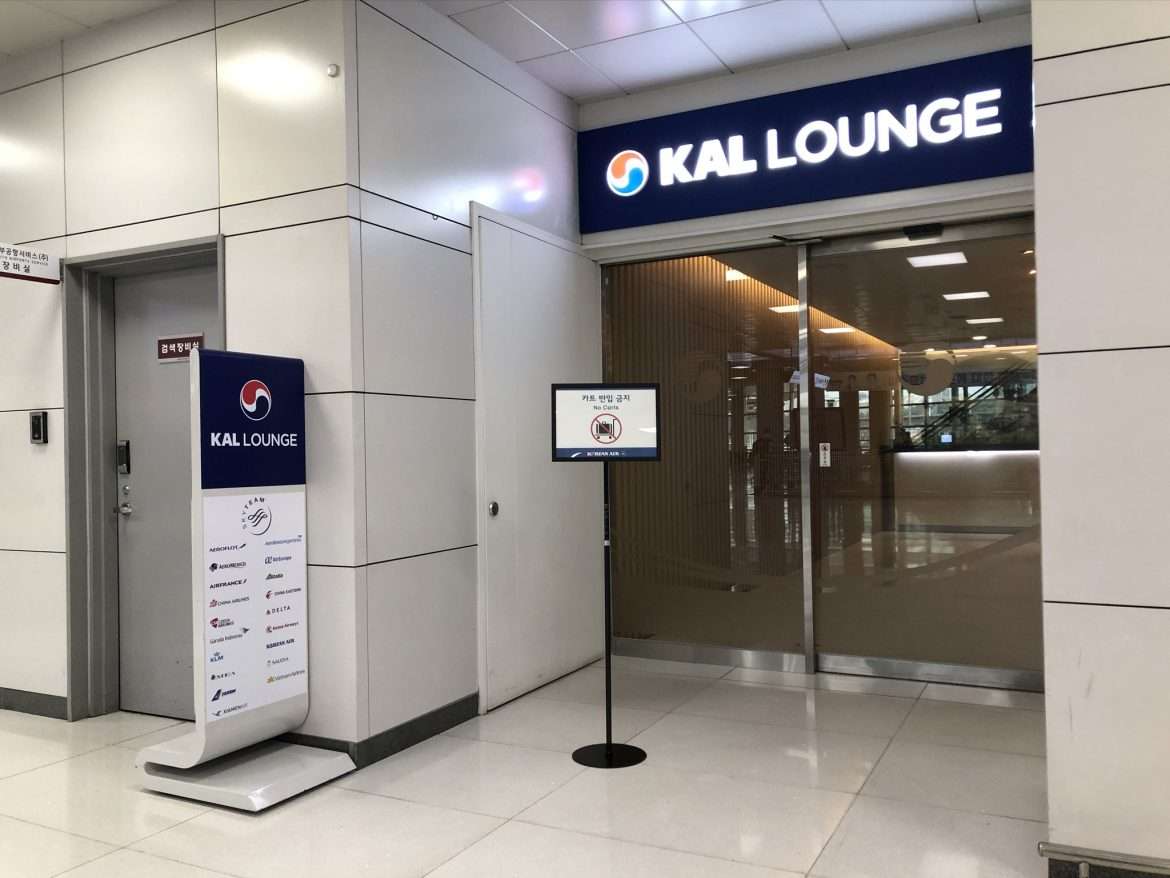 After spending the whole afternoon spotting aircraft at Jeju Airport under intense heat and enjoying the island, it was time to fly back on the most anticipated Korean Air Airbus A220.

I have flown on the Airbus A220 quite a few times including Korean Air to Busan last year, this was Sam’s first time on Korean Air. Therefore, we chose one of the latest flights back to Seoul that was operating with Airbus A220.

Prior to our departure, we were invited to visit Korean Air’s KAL Lounge to get some refreshments before the flight. I visited the lounge numerous times but this was my first time actually reviewing this neat lounge.

Around 6 PM in the evening, we went back to the airport for check-in. Our flight departed around 7:30 PM so there was enough time for us to take a look around the airport including the lounge.

Korean Air’s check-in counter is located on the left-hand side of the area with counter numbers between 1 thru 20. The counters are easily identifiable by the airline logos on the signs.

Like many other domestic lounges in Korea, Jeju Airport is one of the locations where airline lounges are at the landside, before the security checkpoint. In the past, I have never thought that an airline lounge will be located outside the security so I had an experience reclearing checks to exit the airside.

KAL Lounge in Jeju Airport is located about 50 meters left from the domestic check-in counter.

The lounge operates daily from 6 AM in the morning through 9 PM in the evening. But the lounge hours can be varied by the flight operating schedule sometimes. Jeju is known to have unexpected weather conditions throughout the year so flight delays or cancellations might affect the lounge hours.

The entry to KAL Domestic Lounge at Jeju Airport is open to those who book Korean Air and satisfies the following conditions:

The KAL Domestic lounge in Jeju Domestic Terminal is a small lounge compared to the Asiana lounge. The general atmosphere is similar to other Korean Air domestic lounges, offering light snacks and drinks before the flight.

Once entering the lounge, there will be a reception where lounge staff will be scanning your boarding pass and beside it, there is an open-style luggage storage area and a coat room. Since the lounge is quite compact, large carry-on items are recommended to be stored here.

The lounge is very simple with armchairs and a glass coffee table in between. I believe the capacity of the lounge is around 100 so sometimes it creates overcrowding during peak hours. Most of the seats were single seats while there were tables with seats of four by the window.

There are no separate power sockets on each seat so you would need to move around to find one to charge. This was the only drawback of the lounge I can find.

Opposite the snacks stand, there is a separate VIP room with a sliding door. The VIP room has a couple of chairs and a sofa with a TV. The large sliding door created complete privacy from the surrounding.

The Jeju KAL Lounge also does not offer a buffet instead, it offers a selection of snacks and pastries and drinks. Alcoholic drinks are not available in the domestic lounge. Only water, soft drink, juices, tea, and coffee are served.

I remember prior to the pandemic, there were a lot more drink options but now only coke is offered. Hopefully, they will be restoring more options soon.

The restrooms on the lounge are located beside the VIP room. Interestingly, out of three restrooms, two are shared and one is for women’s use. Two of them had both urinals and toilets while the other only had one.

The restroom is private so that was the plus side but during peak hours there might be a line to use.

Prior to our flight back to Seoul, we had some time to visit Korean Air’s KAL Domestic Lounge at Jeju Airport. The lounge is much smaller in size compared to the Gimpo lounge but it offered the same snacks and drinks.

Power sockets were not available on each seat so I find that a little uncomfortable but since there are a lot of public charging stations throughout the airport so it did not bother me that much.

Keep in mind that the lounge is located on the landside, beside the check-in counters so make sure you do not enter the security checkpoint if you want to use the lounge, or else it will be time-wasting reclearing.

After spending around 30 minutes in the lounge, it was time to board Korean Air’s Airbus A220. I am excited to be back on board the A220 and will be posting my review in my next post.