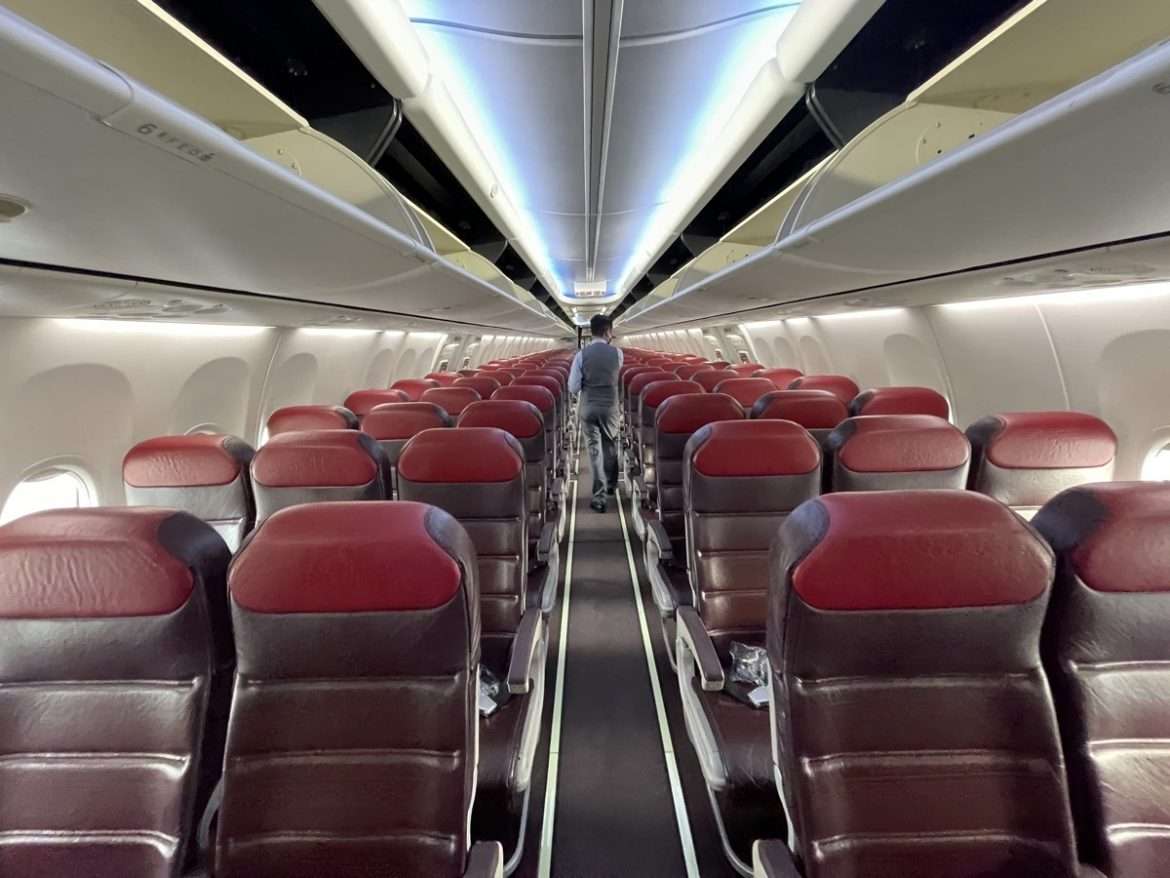 Upon landing in Kuala Lumpur after my initial flight from Seoul, it was almost 4:30 PM and my connecting Malaysia Airlines flight to Bangkok, Thailand was boarding in 1 hour time. I wanted to use the lounge but first of all the gate was on the main terminal while Malaysia Airlines’ Golden Lounge with the first class was located at the satellite terminal.

So as soon as I got off, I ran towards the lounge to get some refreshments and quickly went back to the main terminal. Moreover, the shuttle train was not operating and hence I had to wait for a bus ride which took me quite a time.

In total, I spent only 20 minutes in the first class lounge having only a plate of dessert, and in no time, rushed to my boarding gate to not miss my flight.

The Golden Lounge first class section is one of my favorite Oneworld lounges in the world. In the past, when Malaysia Airlines operated real first class on board its now-retired A380s and current A350s. Hence, it offered first class lounge for both the passengers in first class and Oneworld Emerald members.

I will fully review the lounge on my return flight to Seoul. During my short visit, I directly head to the dining area and ordered something that can be readied within 10 minutes. When I asked the lounge staff, she told me dessert was the fastest to prepare so I’ve chosen the chocolate cake.

After a quick dessert, I rushed to take the shuttle train but since it was out of service, I had to take the bus to the main terminal. The journey took around 7 minutes and I made it just in time for boarding.

Since my flight to Bangkok was fairly light, the security screen and boarding pass checks only took less than a minute.

I have been on the B737-800 series numerous times and it is one of the best narrowbodies to be produced. Malaysia Airlines currently has 39 of these B737 series with an average age of 10 years and it flies extensively within South East Asia and domestic routes.

The cabin on the B737s is configured into two classes: Business and economy class with 160 seats. What I love about the cabin is the interior design that comes with Boeing Sky Interior, which is inspired by the 787 Dreamliner’s advanced interior.

Since the aircraft is relatively old, you could see signs of again on the seats but Malaysia Airlines will be refurbishing the cabin this year with much newer looks.

As you can see below, seat rows 12 and 14 definitely have the largest legroom compared to other seats although it does not recline.

Here is a view from a different angle. You can compare the pitch between seats 14 and 15 below. The emergency seats are available at extra cost. On the other hand, if you are Malaysia Airlines Enrich program or the Oneworld elite, you can choose the seat free of charge depending on your tier.

Obviously, there is clear aging of the seat with the leather faux wrinkling or tearing. I am waiting to try out the new seats which are already flying on some destinations.

For emergency exit row seats, the tray tables are all located under the armrest, similar to the bulkhead seats. The minor issue I have been monitoring is that since the table is supported by a small hinge, it tends to tilt to one side, making the meal box and drinks slide.

Overhead reading lights and air vents are all offered to each passenger. You can either control the lights from the remote controller or by pressing the button beside the lights. Also, plenty of overhead storage bins are offered in the Boeing B737-800. With the new Sky Interior, the bins were also redesigned to pivoting bins which reduces the space needed.

When it comes to sunset, the amazing mood light kicks in giving the cabin a calm environment. I really love the blue lighting and am excited about how it will be when it matches the newest cabin!

As of now, most Malaysia Airlines B737 series are still equipped with personal in-seat AVOD systems which I find great to watch movies or listen to songs during the flight. However, starting mid-2023, you won’t be able to find these anymore when the cabin refurbishment is finished.

Instead, it will be rolling out a new IFE system called MHstudio by connecting to onboard Wi-Fi. This is a little inconvenient as you would now need to bring your own mobile or tablet device to watch a movie.

Malaysia Airlines is a full-service carrier, which means even on a short two hours flight, you will be receiving your meals and drink services on board. This is one of the reasons I choose this airline to travel around South East Asia with its lucrative fares.

Since the aircraft is small, there are only three lavatories inside the cabin. Of the three, one is used for business class passengers while the other two are located in the aft section of the aircraft, at the last row.

Lavatories are equipped with simple amenities such as liquid hand soap. Keep in mind that sometimes the lavatories do not pump the water while the aircraft is on the ground so in that case, you should ask the crew if they could tell the captain to turn on the water flow.

Connecting from Kuala Lumpur to Bangkok, I was on board Malaysia Airlines’ Boeing B737-800 fleet. It was a short 2 hours hop but I received a full meal and drink service which I highly rate the airline with its slogan ‘Malaysian Hospitality.’

Even with such a short flight time, the cabin crew members were able to offer full services throughout the flight without any issues. I will come back with more Malaysian Airlines reviews including the first class lounge in the coming posts.