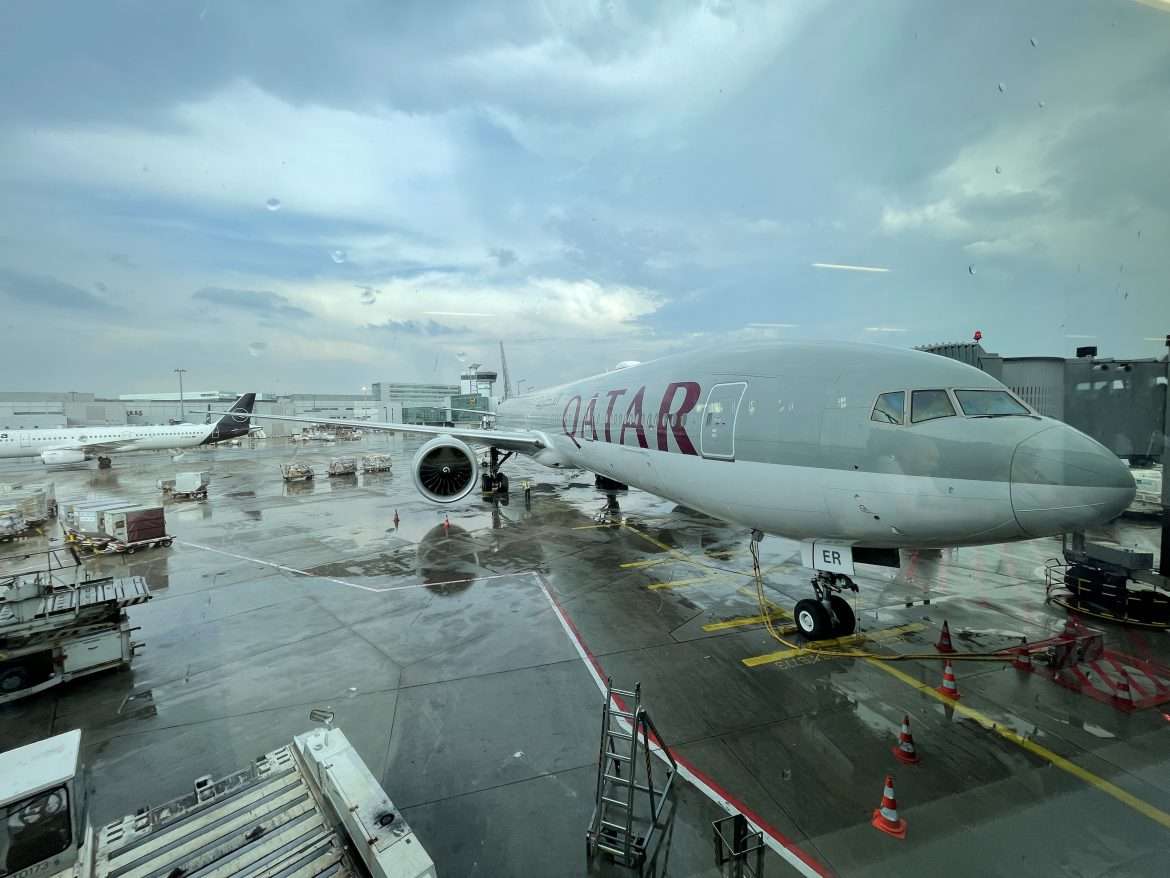 Spending some time at the Air Canada Maple Leaf Lounge, it was time to be back on board Qatar Airways back to Doha. I will not go over much on this flight as there’s no difference from my previous flight to Frankfurt.

Rather, I will write a review about the seat I was seated in as there was a little difference between them… and the ground delay due to torrential downpours just before departure.

As soon as I board the plane, I noticed the aircraft was not even connected to the tow truck and I was curious about what was going on. In the end, I found out that due to the heavy rain before boarding, the ground service department had to temporarily pause the ground operation in terms of baggage loading and many more.

This created a 70 minutes delay and we all had to sit onboard for at least an hour before the aircraft finally pushed back.

On the flight back to Doha, I was seated at seat 18E. Many of you might wonder why I am seated in the middle 4 breast seat. The answer lies in the configuration of the aircraft.

As you can see below’s seat map, on Qatar Airways’ B777-300ER, the first two middle rows after every bulkhead have only 9 seats abreast in a 3-3-3 layout instead of 10 seats in the usual 3-4-3. So the two rows are more comfortable and less feeling cramped plus with extra space on the aisle, seats 18E, 24E and 36E are one of the most comfortable seats on Qatar Airways B777-300ERs.

There is also an additional partition attached to the side of the headrest.

While I have not reviewed seats 19D, 25D and 37D, these seats have both advantages and disadvantages. Speaking about the advantage, the seat offers unlimited pitch similar to emergency exit row seats. But it compromises the seat with immovable armrests and the tray table and IFE monitor fixed into the armrest.

Similar seats can be found on all bulkhead and exit row seats.

Apparently, my armrest is damaged probably someone pushing downwards with some force.

An hour after departure, dinner was served with a choice of three different main meals. The meals served on board Frankfurt – Doha flight were double catering which means the meals were brought from catering in Doha. I guess Qatar Airways did not sign a contract with Gategourmet or LSG Skychef in Frankfurt.

Double catering meals are usually colder and less appetizing as they travel all the way from Doha. So most of the time, I have a full meal before the flight either at the lounge or restaurant and skip the dining on board. It’s not my type of eating foods that are less fresh.

After the meal service, you can always stop by the galley to get some movie snacks too.

I am back again on board Qatar Airways Economy Class from Frankfurt to Doha before continuing my flight on A380 First Class. I did not go over much detail as the flight was the same as my outbound flight.

But the seat I was seated in was much more comfortable and felt more spacious compared to the 10 abreast rows. If you travel alone and wouldn’t bother a window seat, I’d recommend seats 18E, 24E and 36E.