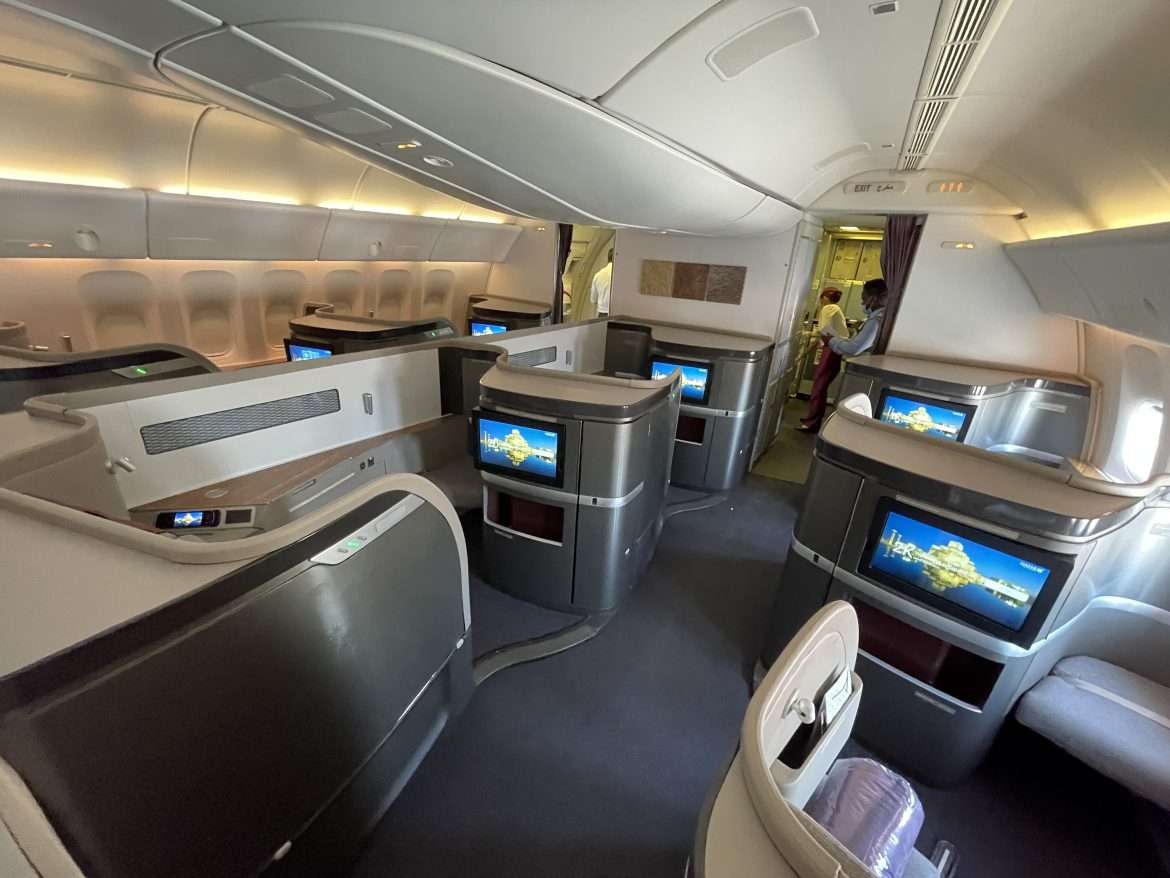 Over 10 hours at the wonderful Qatar Airways Al Safwa First Lounge (Part 1) (Part 2) has come to an end. It was time to depart for Zurich, Switzerland with a special type of Qatar Airways fleet. I am particularly excited about this aircraft configuration because it is a four-class Cathay Pacific-leased aircraft, featuring a real “First-Class.”

Late last year, with the lawsuits between Airbus and Qatar Airways lengthening regarding the Airbus A350 paint issues, the airline decided to lease four Cathay Pacific Boeing B777-300Ers to avoid aircraft shortages that will impact flight schedules.

And as of this February, Qatar Airways acquired these B777s under the registration numbers:

The registration is temporary as the airline uses A7-BA(*) or A7-BE(*)on its own fleet. So it is pretty easy to identify if you’re flying one of those four leased Cathay Pacific aircraft. The leased aircraft also features a white body with a burgundy-colored Oryx logo on the tail.

Before reviewing my first class inflight experience on Cathay Pacific-leased Qatar Airways, I will briefly go over the details about these leased aircraft.

The four Boeing B777-300ERs have an average age of 13 years and all first entered service with Cathay Pacific between 2009 and 2010. So the aircraft is pretty aged and its interiors show signs of aging.

During the pandemic, all four aircraft were stored since the 2020s with unseen future but a year later, Qatar Airways leased them as the airline was facing aircraft shortages.

Cathay Pacific B777s is configured into a four-class cabin with 294 seats:

Qatar Airways does not offer a premium economy product so these seats are sold as economy on the Qatar Airways website and be assigned at extra cost. For comparison, here is the seat map of Qatar Airways B777-300ER with Qsuites.

If you notice Cathay Pacific’s B77W is premium heavy with only 201 standard economy seats while Qatar Airways has 312 seats. That’s more than 100 seat difference.

The Cathay Pacific-leased aircraft are normally parked in a remote bay and my gate was assigned to C42 which required a 5-10 minutes bus ride to the aircraft. As I get to the gate, the first class bus was not ready so I asked the ground staff if I can just get to the aircraft with the business class passengers.

After a short bus ride, I reached the remote gate where the aircraft was parked, got off, and went up the stairs. As I went up the stairs to board the plane, my mind was full of interest and enjoyment to fly back on Cathay Pacific’s first class nearly after 4 years.

I last flew Cathay Pacific first class from New York to Zurich via Vancouver and Hong Kong. And now I am flying Qatar Airways to Zurich again!

The first class cabin features six large semi-private seats with no overhead storage spaces. However, there is plenty of storage on the seat itself similar to the first class on Qatar Airways A380.

The first class seats on Qatar Airways B777-300Ers feature a huge 81 inches (205cm) of pitch and 36 inches (91cm) of width. The size of the seat, especially the width-wise is one of the biggest out in the airline.

Based on the Cathay Pacific website, first class seats in the B777-300ER are called suites. Since there is no door for total privacy, there is a ‘Do not disturb” setting on the touchpad where the light beside the seat number will illuminate to red when turned on.

But to be honest, the do not disturb mode is not utilized that much since the crew members can check the passengers while walking down the aisle.

Each seat is equipped with a fold-down armrest on each side either to rest your arm or place phone or tablets. And in the front of the seat, a separate small ottoman with a safety belt is positioned. This ottoman is useful when traveling in pairs as the seat can turn into a dining table for two.

This huge seat is really comfortable and transforms into one of the widest fully flat beds in the sky. What I find funny is the seat configuration touchpad by the inflight entertainment remote controller is still in Cathay Pacific theme and it also has Cathay’s logo. I guess it will cost extra to convert to Qatar Airways design.

There is an additional seat adjustment buttons under the literature rack which are convenient to press when in bed mode.

As I mentioned earlier, there is only one small storage compartment in the seat and the large space is located behind the monitor. The larger storage area has hangers inside to hang your clothing or jackets.

There are two literature racks: one by the fold-down armrest and the other below the IFE monitor. But there were no magazines or duty-free booklets stored. Instead, a safety card, air sickness bag and a headphone were placed in.

The reason? Having a white flower or any kind of “flower” could mean both positively and negatively. And to avoid complaints from passengers, Qatar Airways planned not to place any form of floral decorations on it.

Similar to my first class flight to/from Bangkok, Qatar Airways offered Diptyque amenity kits, a pajama and a protective kit. Since I got male amenity kits for my previous two flights, I requested a female version which was a little better in design than the male ones.

The pajamas are not usually given out on a day flight on business class but in the first class, they were provided. This probably is the only difference amenity-wise between the first and business class.

As soon as I was seated, the first class crew came and handed me out the menu cards and asked me if I wanted any drinks. Since it was early morning, though my mind craved the Krug champagne, I requested a glass of water and a couple of minutes later, she came back with it along with some cheese cubes and olives.

When the cabin crew returned back to take down my meal preference, I asked her for a lobster sandwich and tea after taking off and requested to make a bed for another round of sleep.

I was feeling heavy jetlag after flying from Asia to Europe twice in three days so I decided to get some sleep first since the flight time to Zurich was around 6 hours.

This is part one of my experience while on the ground. As the aircraft aged so did the condition of the seat. But operating first class cabins on more European routes is definitely a positive experience for passengers.

I will go over the rest of my inflight experiences: From dining to entertainment. So stay tuned for my review on Doha to Zurich in Qatar Airways First Class!