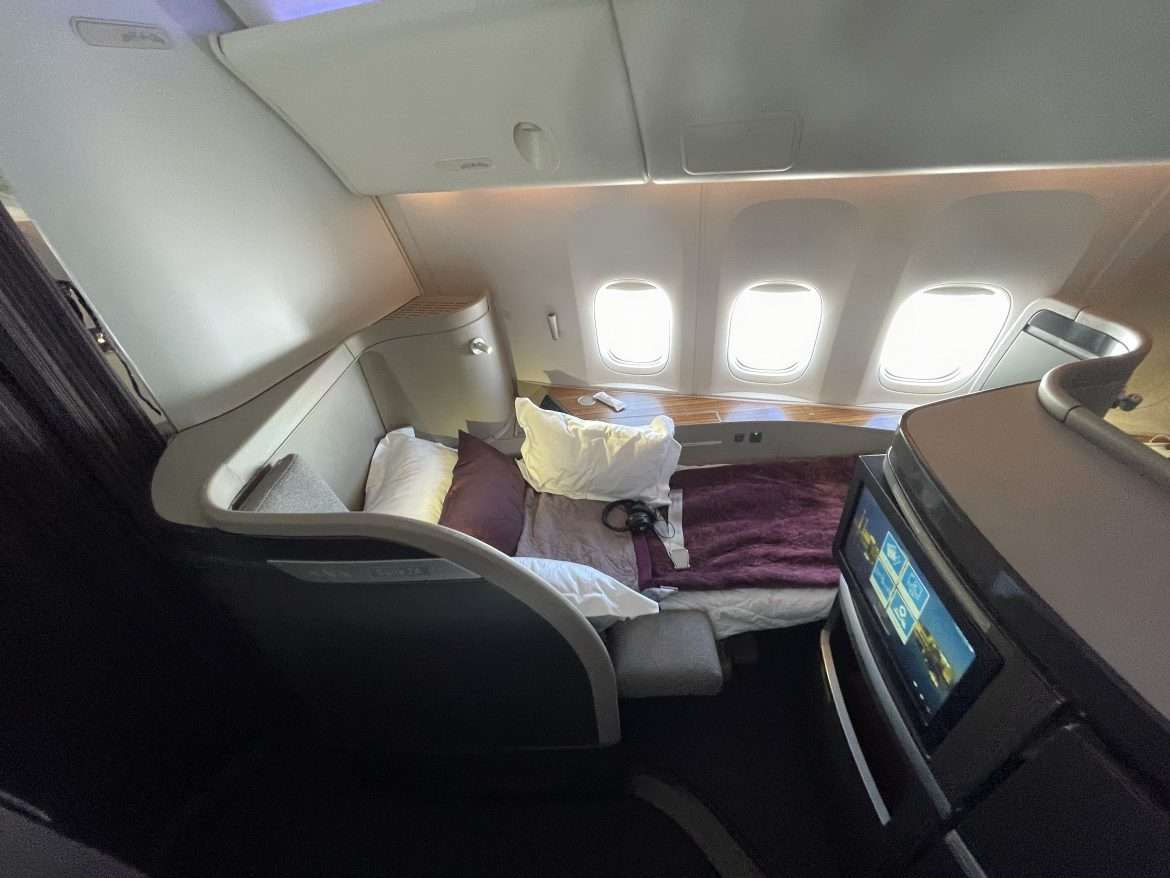 Part two of my review will go over my post-takeoff inflight experiences on Qatar Airways B777-300ER First Class. If you haven’t checked out my pre-takeoff review, you can check it out here.

As usual during the morning rush hour at Doha Hamad International Airport, the pushback got delayed and my flight departed 45 minutes late. After taking off, the inflight service quickly started and the cabin crew came and brought me a glass of water and warm mixed nuts.

Prior to departure, I requested the cabin crew that I would just like to have a light meal and continue to get some more sleep. I did not have an appetite so I chose to have a lobster sandwich after taking off and green tea.

30 minutes after takeoff, the lobster sandwich was served along with the tea. I took some time going around the odd yet familiar cabin to check if there are differences before having my meal.

After having a quick meal, I asked the cabin crew to provide me with the bedding. She gladly took the mattress pad and prepare the bed.

I was wondering if Qatar Airways pre-design the mattress pad according to Cathay Pacific’s wide first class seat but that was not the case. Qatar Airways used a narrow mattress pad that has similar in size to the ones on the A380 first-class seats. So it did not completely cover the seat, leaving the armrest area uncovered.

The bedding and blanket did not differ that much but I had a chance to take some pillows from the empty seats, creating my own pillow fortress. For sure the first class pillow was soft and comfortable.

About three hours after departure, I was wakened up by the crew for brunch. I still felt a little exhausted from lack of sleep nonetheless caviar and champagne were waiting for me.

With the table set for dining, firstly, an amuse-bouche was served prior to the main dishes.

Then my favorite first class dish: Caviars. The caviars on Qatar Airways are always amazing but the smoked salmon was a little bit too salty for my taste.

I skipped the soup of the day directly to two main dishes: Steamed lobster and Braised Beef. I have been eating lobsters for the past three flights but the taste never gets tiring. With the excellent catering services, the lobster remained fresh and appetizing.

I had a second main dish, braised beef with mashed potatoes. Having an extensive amount of seafood both in the air and on the ground for the past few days, I decided to get some proteins too.

I prefer a steak more than braised beef since the meat itself was too soft. But regardless of that the sauce and the sides were excellent.

After finishing up the main courses, I went for dessert. There are a few different dessert options and I chose a menu called “Black Forest.”

The presentation and plating were beautiful but I am still curious about the taste.😅 It is a white chocolate ball with cocoa powder sprinkled with berries. Perhaps I should have chosen some other desserts but I didn’t have any space in my stomach at that moment.

When all the meals were cleared, the cabin crew came and gave me a box of Läderach Chocolates.

Since there were only two passengers in first class, the dining finished pretty quickly as I was the only one who was dining. By the time I finished my meal, I still had around two more hours to relax before landing.

On this flight, I did not have any alcoholic drinks at all. I was feeling too tired and decided to go for water and my favorite cranberry juices throughout the meal. but don’t be disappointed, on my return flight back to Doha, I had a Krug feast.

Since the aircraft’s system is configured into Cathay Pacific’s version, Qatar Airways created a simple Oryx One software to be installed into this aircraft’s Inflight entertainment system.

The Panasonic-made IFE remote controller is stowed beside the seat controller pad by the window. The controller features a touch screen in the middle with buttons on each side. that is identical to those you’ll find on Qatar Airways B777 Qsuites.

I find it whimsical that two brands co-exist on each seat.

Different from the other fleet, the first class seat had a 15-inch sliding-type monitor that looks rather outdated. Also, the screen has to be stowed into its original position during takeoff and landing but it also can be adjusted to any angle whilst unlatched from the storage.

The first class noise-canceling headphone is preset on the front part of the literature rack. However, it is a little inconvenient to use the three-pin headphone on a two-pin socket with a one-pin adapter. Since the adapter has only one pin, the headphone easily disconnects from the plug.

The power outlet is located beside the tray table compartment. It offers a universal type socket that supports all types of chargers types.

The Boeing B777 is also equipped with a GoGo inflight Wi-Fi system which offers an unlimited high-speed internet connection. The only disadvantage of this Wi-Fi is there is no complimentary one hour of usage.

Since the service provider is not Ooredoo which features on Qatar Airways B777 and A350 fleet, you have to pay US$10 to use the internet. But the good thing is, once paid, the connection is unlimited. On medium to long-haul flights, it is great to spend ten dollars to send a work email, browse the web, shop online and keep in touch with others.

The speed of the full-flight Super Wi-Fi was fast enough to stream videos, upload photos and videos o social media and even seamlessly track my own flight without a glitch.

The first class lavatories are both located on the front section of the first class cabin, just behind the flight deck. The lavatories are kept in the original design as the Cathay Pacific version and feature amenities from Diptyque, toothbrushes, mouthwash, grooming and shaving kits.

Due to the pandemic, Hong Kong shut its doors and Cathay Pacific cuts its first class services on most of the routes but I am excited that Qatar Airways leased those aircraft with first class cabins and I had a chance to fly in it once again.

This was an interesting experience for me as Qatar Airways does not offer a real first class on its Boeing B777 fleet. The only aircraft that first class exists is their A380s. Currently, the aircraft with first class mainly operates in Zurich and the Maldives but from time to time, it operates in Istanbul, Colombo and Kuwait City too.

Service-wise, there is no difference from my previous flight to and from Bangkok. But the seats were much more private than the A380s.

My flight to Zurich was a turnaround flight so I had to get off and recheck in as fast as possible. I will go over some more first class experiences in this B777 on my next review back to Doha on the same flight.