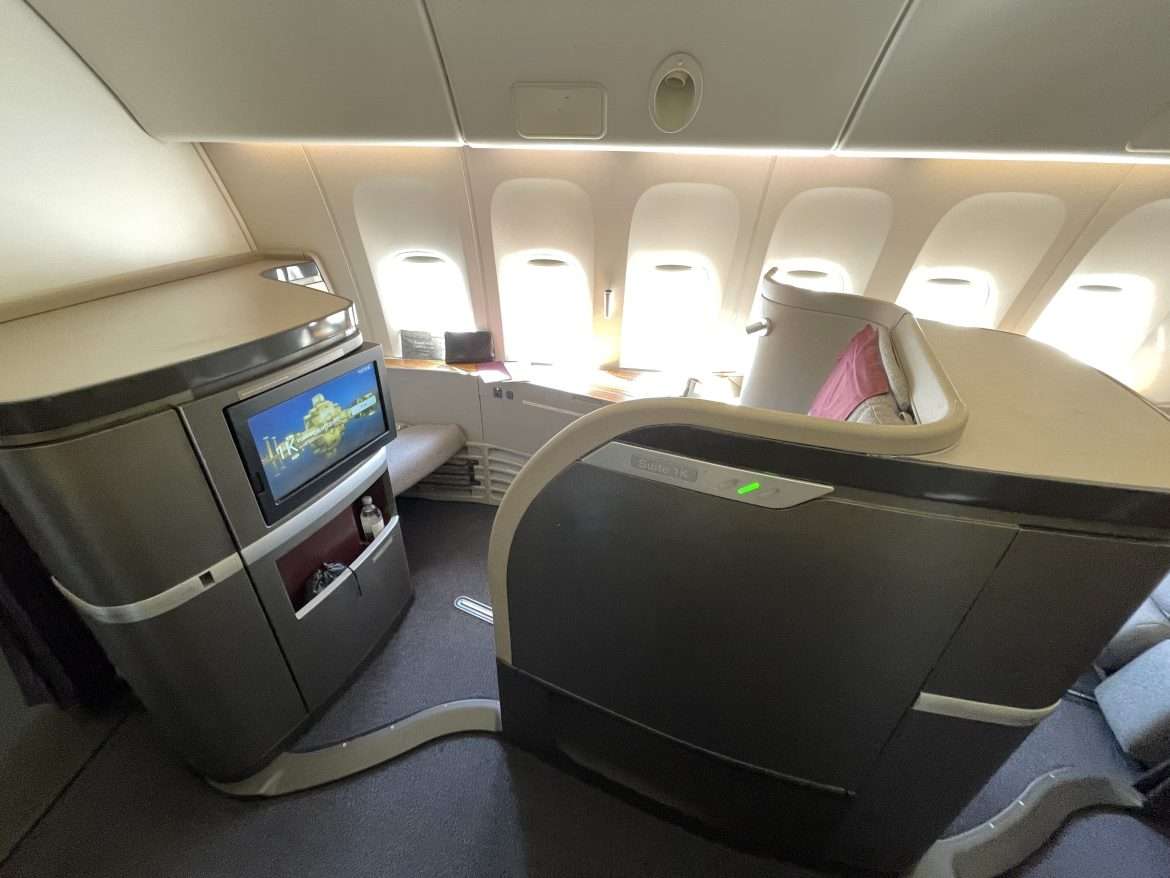 Three hours after arriving in Zurich, Switzerland, I am once again on my way back to Doha on the same flight I took previously. You can check out my outbound flight review here (Part 1) and (Part 2).

Since I am doing a turnaround flight, I will go simply review the cabin and seats but will go over my flight experiences in detail.

As I land in Zurich, I rushed toward the immigration and arrivals in order to check in before the counter closes. I only had 1-hour window from deplaning to the check-in counter so I had to run.

After 15 minutes, I cleared every arrival formalities and arrived at the Qatar Airways counter. Thankfully, there was still a long queue in economy class.

When it was my turn for checking in, the duty manager looked at my travel itinerary and said:

“Oh! You are the one who booked this unusual reservation.”

We all laughed because indeed my reservation was really uncommon. I booked a one-way flight from Zurich to Frankfurt via Doha and this obviously was quite hard to understand for the check-in staff members.

The check-in process was quick but I did not have a chance to visit the lounge due to the short connection. Instead, I went to the Zurich Airport observation deck, to do some spotting.

The Zurich Airport observation deck is one of the best features of the airport. I recommend you stop here before the flight to relax with a nice breeze. There are two observation decks: D and E which are open to the public. Unfortunately, the E deck is current, and not operational for this year.

Entrance fees to the observation deck cost 5 Swiss francs for adults and 2 francs for youths. But if you hold a valid boarding pass, it is free to enter.

Boarding commenced a little late due to some passengers having document issues. Nonetheless, I was the first to board and there was even a separate air bridge for first class passengers.

I was the first one to board the aircraft so I had an opportunity to take a look at the empty mini-cabin section of the business class.

The business class features exact same seat color as Cathay Pacific but with Qatar Airways amenities and products. I prefer the reverse herringbone seats on Cathay to the ones on Qatar Airways’ B787s and select A350-900s since there is a small privacy partition around the headrest.

On the return flight to Doha, I was assigned to the right-hand side of the seat: Seat 1K. Unlike seat 1A which I took on my previous flight, 1K is less private due to the opposite seat 1D.

But I was the only passenger going back to Doha so it did not bother me that much. In fact, I used the opposite seat to make a bed during the flight.

As far as I experienced, the first class load factor on Doha to Zurich route is really low. Most of the time, there are only one or two passengers. Therefore, there are plenty of award seats tp book every day.

The wide armrest acts as a coffee table too (though I do not recommend you do that). Even with the armrest down, since the seat is huge, I do not find any inconvenience.

Also on the right-hand side of the armrest, you can find the life jacket kept inside.

There are no large storage spaces beside the seat. Only a small storage space that is big enough to fit wallets or mobile phones.

The main storage area is located behind the IFE screen. In this area, small cabin-sized baggage can be fitted in sideways. And of course, this storage space acts as a coat room with a hanger provided inside it.

Additional space is available under the ottoman but this is generally used to keep your shoes or small backpacks.

More mini storages that are mainly for literature are available in the seat. The forward literature pocket is large enough to stow your laptops or books. Before the pandemic, there were magazines, duty-free booklets and many more but Qatar Airways got rid of the in-flight duty-free service.

Next, I moved to take a look at seats 1D and 2D feature a large partition that blocks off the opposite aisle. Thanks to the fixed partition, these middle seats offer added privacy.

Later during the flight, I asked the cabin crew to make a bed, and here’s what it looks like below. Actually, the middle seat is great to get some sleep due to the feeling that there is a wall enclosed around it. But the translucent screen on the wall can be uncomfortable if the opposite passenger opens up the window since the light will pass through.

But since the galley is right in front of the seat, I would recommend you get a seat on 2D as it may be a little noisy.

As soon as I get back to my seat, I was offered an amenity kit, a pajama and menu cards. The crew member asked me for a welcome drink and I requested fresh orange juice. Later, on she came with a glass of juice, some cheese and olives.

After some time, the cabin crew returned to my seat with an Arabic coffee and a basketful of dates. In the beginning, I was not a fan of Arabic coffee but the more I drink, the more I fell in love with the taste.

My flight took off 50 minutes late but that was not my worry. I wish I could stay in the cabin as long as I can.

After takeoff, once again, I decided to get a nap after takeoff and decided to have a meal before landing. So I asked for tea with some biscuits.

Around three hours after take-off, I was wakened up by the crew to have my dinner. Since I took a sleep on the opposite seat, by the time I woke up, the dining table on my original seat was being set up.

With the table set up for dining, the first menu offered was the amuse-bouche which was a roasted duck with chili.

Next, the soup of the day was served. The menu was creamy asparagus soup but for me, it was a little too salty.

After finishing the soup, my favorite menu of the day came out. With the caviars, I asked for a bottle of Krug to pair with and it was amazing.

Along with the caviars, I ordered an extra appetizer: Tuna and scallops with chili mango. This appetizer taste quite good with a great balance between the sauce and the meat.

Lastly, for the desserts, I had vanilla ice cream and a chocolate cake with port wine. Qatar Airways offers one of the best ports both in first and business class so if you have a chance, I’d strongly recommend you to try. And it pairs great with desserts.

I have reviewed the details of inflight entertainment systems in my previous posts so I will not cover this here. But for those who have not yet checked out, the screen on the first class is a sliding type with the positions adjustable.

The screen is relatively smaller than other first class monitors and is not high quality as they remained the same since 2009.

Qatar Airways managed to install its Oryx One inflight entertainment on the system but the contents were limited compared to its own aircraft.

The noise-canceling headphones are preset on the literature rack placed inside the pouch. Keep in mind that the connection to the headphone jack does not do well and it is easy to get unplugged.

Connecting to the Wi-Fi service is a very straightforward step. YOu don’t have to log in to your Privilege Club account or create an account to use. A visit to the oryxcomms.com website and paying US$10 will be enough to get connected on board for the whole flight.

The flight took nearly six hours and it was already 11 pm. As the aircraft approached Doha, Qatar, the beautiful nightscape greeted us.

It was a quick less than six hours flight and my first class flight has come to an end. I wish I had a long flight since six hours is too short. But not so fast, I will be connecting to a flight to Frankfurt, Germany in Qatar Airways Qsuite and also have a quick visit back again to Al Safwa First Class Lounge.

Stay tuned for my Qsuite review next! 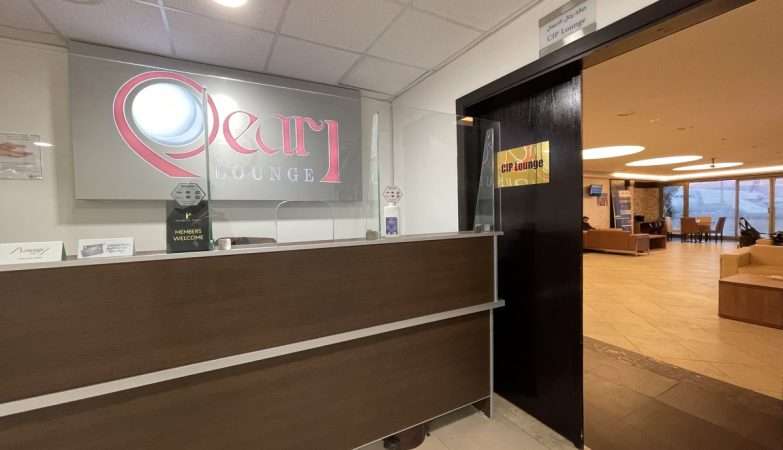