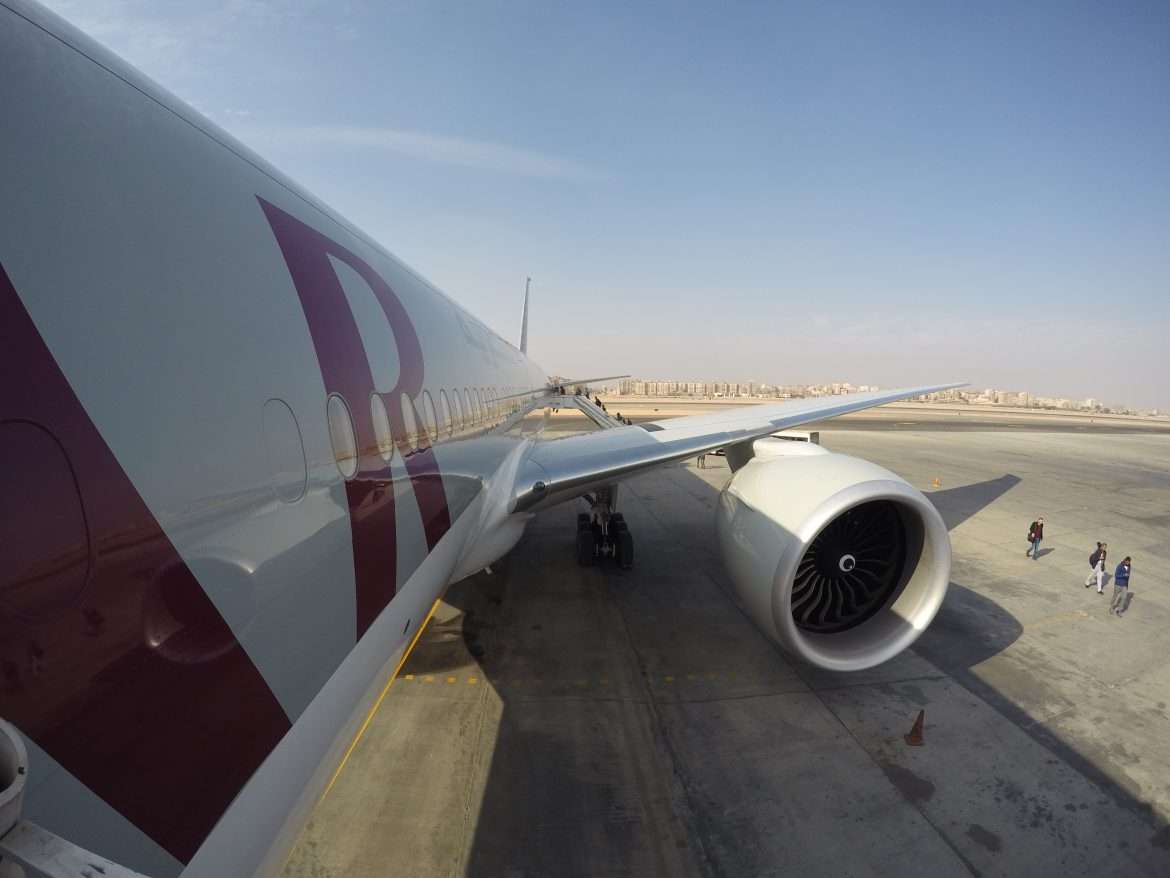 Back with my flight reviews which I restored from my older platform. This time with Qatar Airways.

In this review, I flew from Doha to Cairo and back to Doha as a turnaround. Originally, I booked a flight in the evening the same day with an A330 but I decided to change it as a turnaround since there was nothing to do for hours at Cairo Airport.

The cabin on B77W is divided into two sections: Rows 1-4 and rows 5-7. Some say it is divided into the main and mini cabin but I think they are both same since both sections have a similar number of rows.

Since the flight was departing in the morning and arriving late afternoon, there is a noticeable amount of sunlight shining on the seat. Mood lights were also turned on throughout the cabin to keep passengers feel at ease.

Going outbound on seat 6J, I went inbound to Doha on seat 4K. As you can the first picture below, there is no window right beside the seat in row 4 but there are two more in the front section, so I do not find it uncomfortable as you still can lean forward and see outside.

What I like about these open seats is the leg space and the cabin feels really spacious compared to the Qsuite-equipped cabin. I know there hardly is privacy on these seats but unless you are traveling with a companion or no one is seated beside you, this seat is a perfect way to relax.

Seats had plenty of storage spaces: under the armrest, beside the tray table stowage, and under the IFE screen. You can store your shoes or larger items under the screen while smaller items can be placed nearer you.

The dining service was offered an hour after the takeoff from each airport. The caterings on all turnaround flights are double catering, meaning the in and outbound meals are all stocked from Doha.

Prior to departure, the crew member will approach each passenger for a welcome drink and to take down each individual’s meal preference.

Furthermore, a welcome selection of nuts and drinks was served after takeoff, followed by appetizers and mains. I am a fan of cashew nuts and Qatar Airways knows my taste.

The breakfast menu on Doha – Cairo route is shown below. My apologies for not taking a picture of the menu on the return flight.

Qatar Airways has a great breakfast option on board but I had an amazing meal at the Al Safwa First Class Lounge so I just went for a cheese omelet.

On the way back from Cairo to Doha, a late lunch or early dinner was served. I chose Caprese salad with grilled chicken for the appetizer followed by saffron rice and seafood for the main dish.

Located on the side of the mid-galley compartment, you’ll notice an internal bar with wines and sparkling water stored. If you crave a drink, you can always ask the crew member for assistance.

Oryx One entertainment system is available to my favorite Panasonic IFE system. The 17-inch touch screen monitor is installed and a three-pin noise canceling headset is all ready for this short flight. Although the monitor is touch-screen, the distance between the seat is too far away, you’ll have to use the remote controller to navigate through pages.

A separate universal power socket is located in between the forward part of the seat. While a single USB port is located together with the headphone port under the armrest.

Similar to all other Qatar Airways B777 fleets, there is a total of 4 lavatories in the first/business class section with the lavatories by door 2L, R bigger than the one near door 1. Rituals amenity kits are provided and toothbrush and shaving kits are inside the drawer.

I have combined my Doha-Cairo flight with this review because it is such a short-haul flight and the in and outbound flight has the exact same feature. The service was more likely a “Business Class” rather than a real First Class but the overall service is always seamless.

Flying over the vast Sinai peninsula and crossing the Red Sea is also one of the excitements on flights to Cairo.

I will be constantly recovering my old reviews. Even though some posts may be a little outdated, enjoy my flight experiences on older products and services😉.