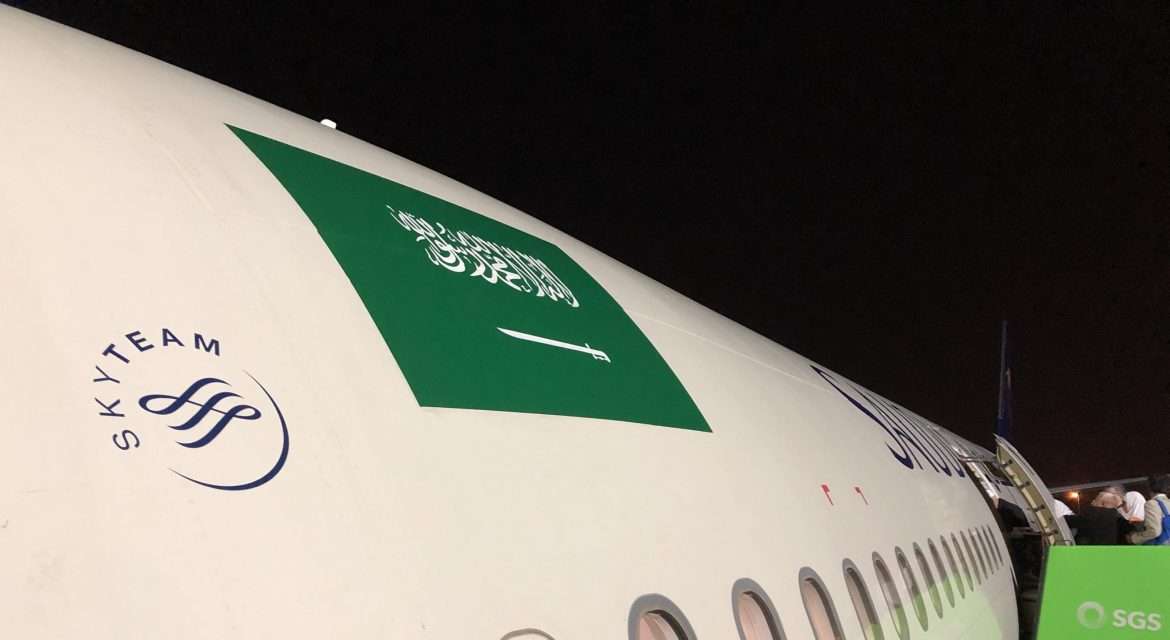 Spending overnight at SAUDIA Alfursan Golden Lounge, sitting awake on the couch, desperately counting down the time till boarding, it was finally 5 AM in the morning.

As soon as my boarding time was near, I grabbed my carry-on and rushed out to the gate. At last, 9 hours of waiting was over! But then when I reached the gate area, it was chaos itself, with no order whatsoever at the boarding area. I believe most of the passengers were returning home after attending a pilgrimage to Mecca.

I somehow managed to squeeze in the crowds to the Skypriority lane but still, a huge crowd of passengers was pushing here and there to get to the bus. As I went down the escalator, one elderly woman encountered a very dangerous situation where she missed her steps and fell to the bottom of the escalator.

After a short bus ride to the remote bay where the aircraft was parked, I quickly got off and ran on board to catch a breath. Luckily, there was a separate step for the forward cabin, or else I had to wait in a long line just to enter the aircraft.

About SAUDIA’s Regional Version Of A330s:

Before I review the onboard products, I will briefly explain the Airbus A330-300 Regional series.

The A330-300 Regional is developed by Airbus, optimized for flights up to 2,700 nm (5-hour flight) covering short to medium-haul routes. The aircraft also offers significant cost savings through a reduced operational weight of around 200 tons.

SAUDIA was the launch customer for the A330 Regional configuration with 20 on its fleet currently. To check whether the A330 is Regional series, you can check its registration code. The A330R has a registration number from HZ-AQ11 to HZ-AQ30.

SAUDIA’s A330R has a total of 330 seats: 30 in Business Class and 300 in Economy Class. The Business Class is configured in a 2-2-2 layout while the Economy has a typical 2-4-2 arrangement. The design of the cabin and creamy khaki color scheme makes you feel like you’re in a desert oasis.

The aircraft is meant to cover distances of less than 5 hours so there is no prayer area installed on this configuration.

The Business Class seats on SAUDIA’s A330R are Rockwell Collins Diamond Seat. These seats are also found on Lufthansa, KLM, and Qatar Airways’ Business Class too. What I dislike about these seats as a solo traveler is that the seats are not private. Moreover, except for the middle seats, those who are seated by the window have to pass over another passenger unless they are traveling together.

With the scorching heat in the kingdom, it is always a great blessing to have individual air vents on each seat.

A seat adjustment controller can be found on the arm rest area.

Due to the design of the seat, there is not a lot of closed storage available. Instead, there are three areas where you could keep or store your belongings. But always carry valuables with you or near you all the time.

A rather long table can be pulled out from the compartment.

After a quick breakfast, I decided to have a proper sleep as I had to face down at the lounge’s dining table the whole night prior to departure. The lie-flat seat was comfortable but the footwell was too small to cramp my feet in. So the best position to sleep was to sleep on one side.

There is an extra seat reclining button on the side when the seat goes fully flat for easy access during landing.

Taking Off From Jeddah:

After boarding the aircraft, the crew member approached and offered me a cup of Arabic coffee and a basketful of dates. The sweet dates were a really good combination with the Arabic coffee.

And just less than an hour after taking off from Jeddah, breakfast was served which seemed to be very early to me. There were three main dishes you can choose from, fruits and cheese selections which were all served on one meal tray.

Prior to the breakfast, a lemonade as an after-takeoff drink was served.

I chose Fluffy Omelette for my breakfast which was cooked as the menu states: “Fluffy.” The fruit cuts were a little bit hard to chew but they were all fresh. It was not a bad breakfast for a 5 hours flight. Again, SAUDIA does not serve alcoholic drinks on all its flights so the beverage option was very simple with juices, soft drinks and hot drinks only.

On my previous flight from Singapore to Jeddah, I experienced how SAUDIA’s in-flight entertainment contents were. From the largest library of Islamic content among airlines to a choice of over 4000 hours of shows and musics, it was enough to enjoy my five hours flight. For more information about the contents, you can check SAUDIA’s website.

SAUDIA’s A330s are equipped with Thales IFE systems with both touch screen functions available on its screens and remote controllers for easy navigation. A 3-point noise-canceling headphone is provided for the Business Class passengers.

Also, SAUDIA’s A330R is equipped with Skyfi, where you can enjoy Wi-Fi on board. During my trip, there was a promotion for Business Class passengers where I received a complimentary 50MB of data during the flight.

Other than the promotion, all passengers are eligible for Free Messaging Plan and you could also purchase an additional data cap for a fee.

Just beside the remote controller stowage, there are two USB ports available to connect your devices for charging. Though not in the picture, a separate universal power socket is available in between the seats.

This is the last part of the three-part SAUDIA experience I had in 2019.

To wrap up this review, I flew from Jeddah to Tunis on my first Airbus A330 Regional series with SAUDIA. Though the ground service needed some improvements, the in-flight experience was incredible with great hard products and dining.

With SAUDIA having a direct flight from Riyadh to Seoul as of yesterday, I am planning to visit Riyadh soon as well!