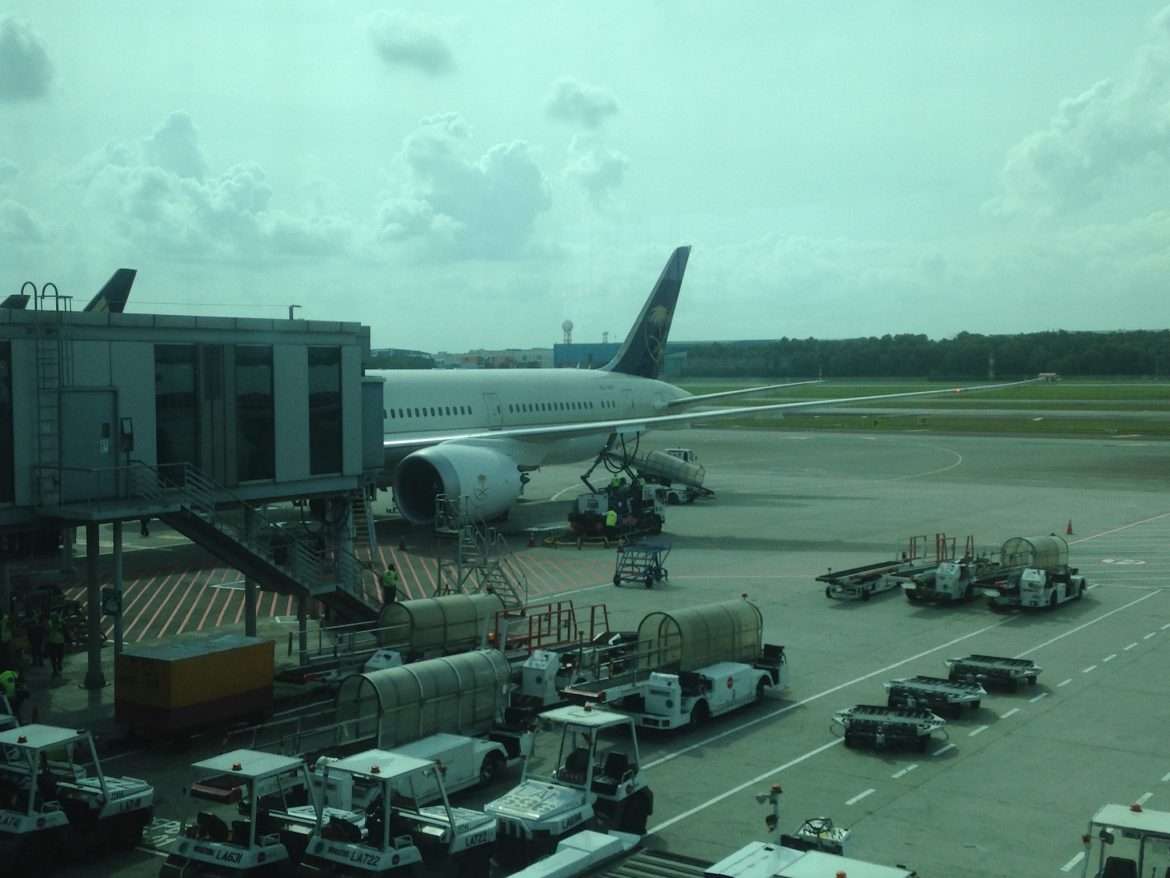 This June, Saudia announced the resumption of flights to Seoul, Korea after almost three decades. Celebrating the inaugural flight which will be on next Tuesday, 16th August, I will review my SAUDIA experience I flew on 2019.

SAUDIA is one of my favorite Skyteam carriers and it is one of two Middle Eastern airlines to be part of the alliance. (The other one is MEA from Lebanon).

I have not posted any reviews even on my older platform about SAUDIA so it might be a little outdated but enjoy my flight from Singapore all the way to Tunisia via Jeddah. This is a three-part review: This post will cover Singapore to Jeddah sector, the Alfursan Lounge at Jeddah followed by Jeddah to Tunis.

Prior to departure from Singapore, I was in Jakarta, Indonesia. I took Lion Air to Singapore Changi at 11:15 AM, arriving at 2 PM. The flight got a little delay out of Jakarta so after I arrived in Singapore, I had to rush to SAUDIA’s check-in counter as the boarding was starting in 90 minutes.

During checking in, I saw a notice that there is a dress code to enter the Kingdom of Saudia Arabia as well as on board the flight. If you happen to wear shorts, the check-in staff will likely ask to you change your pants to longer ones that will cover your knees.

What’s interesting about SAUDIA’s fleet is that there is a prayer area in the rear of the Economy Class cabin on most of its widebodies except the regional A330R. I have not had a chance to take a look but you can definitely search on the web.

This specific aircraft I flew was less than 2 years back when I flew. So the cabin was generally new and fresh.

There are only 6 rows in SAUDIA’s B787-9 Business Class with 20″ (50cm) of width and 47″(120cm) of pitch, which can go fully flat. I chose seat 6L, which is the last row by the window. Though this seat feels private as it is located in the last row, there is a lavatory and galley just behind it which can be noisy.

The window seats A and L are more private as they face towards the window, away from the center seats. If you are traveling alone, window seats are highly recommended.

From storage in the adjustable armrest to the foot well, there are quite a lot of storage spaces all around the seat where you can store from small personal items to larger items such as tablets.

A coat hanger is located just behind the forward seat and a touch screen seat remote is attached on the right.

With large overhead bins with plenty of spaces above the seat, two air vents and light are also installed on top of the seat. Additional to overhead lights, extra reading light is located on the cocoon.

The seat can turn into a fully-flat bed with a warm blanket and a comfortable pillow. Unfortunately, there is no separate duvet to put over the seat so I took an extra blanket and placed it on the seat. It was comfortable enough for a good 6 hours of sleep.

Due to the light load, boarding was quick and we were departing on time. While taxiing, SAUDIA’s famous pre-departure prayer was shown.

On this 9 hours flight, 2 meal service was provided. An after-takeoff drink was offered followed by a dinner 30 minutes after takeoff and a light snack 90 minutes before landing in Jeddah.

Firstly, a welcome drink was served with Arabic dates after boarding. For those who are not a fan of Arabic coffee, you can choose juice or mineral water as well.

A separate dining and beverage menu was offered before departure. The crew member will approach each customer before or after takeoff for their dining preference.

For the dinner option, I chose Western Seafood Hors D’oeuvres as an appetizer and Angus Steak for the main. I was surprised the quality of the meal was really good. SAUDIA, being a little behind compared to its Middle East competitors, the meal was quite outstanding, especially the garlic bread.

The dinner was served in a tray readied from the galley cart while the main was served separately one by one.

Due to strict Islamic rule in the Kingdom, SAUDIA does not serve or permit passengers to carry or drink alcoholic beverages on its flights. So most of the beverages served on board consist of juice and soft drinks.

One and an hour before arriving in Jeddah, Saudi Arabia, a light snack option was provided. I chose the ravioli pasta for the pre-arrival meal which tasted not bad.

SAUDIA’s Business Class has a 17″ wide HD screen monitor with more than 3500 hours of video entertainment. To check out the full list of contents, you can visit SAUDIA’s website.

An individual universal power outlet is located inside the touch screen remote controller compartment as we as two USB ports to charge your devices.

SAUDIA also offers Wi-Fi onboard B787s with rates that seems a little expensive with data caps. But on my flight, I received a promotion code that offered a free 50MB plan throughout the flight. Below, you can check out the internet plans on SAUDIA.

The speed of the onboard Wi-Fi was quite fast to send and receive messages and browse through the internet and social media. But again, the data limit was bothering me.

I took a flight from Singapore to Tunis via Jeddah and this was my first time on SAUDIA’s B787-9. On this first leg to Jeddah, I find SAUDIA B787’s hard and soft products to be satisfying with great dining options and qualities.

The IFE contents are a little weak to be honest, but I enjoyed watching the flight map throughout the flight. Nevertheless, I had a good 6 hours of sleep under a warm blanket and arrived at Jeddah.

In my next review, I will go over SAUDIA’s Alfursan Golden Lounge at Jeddah Airport and eventually on my flight to Tunis on its A330R.