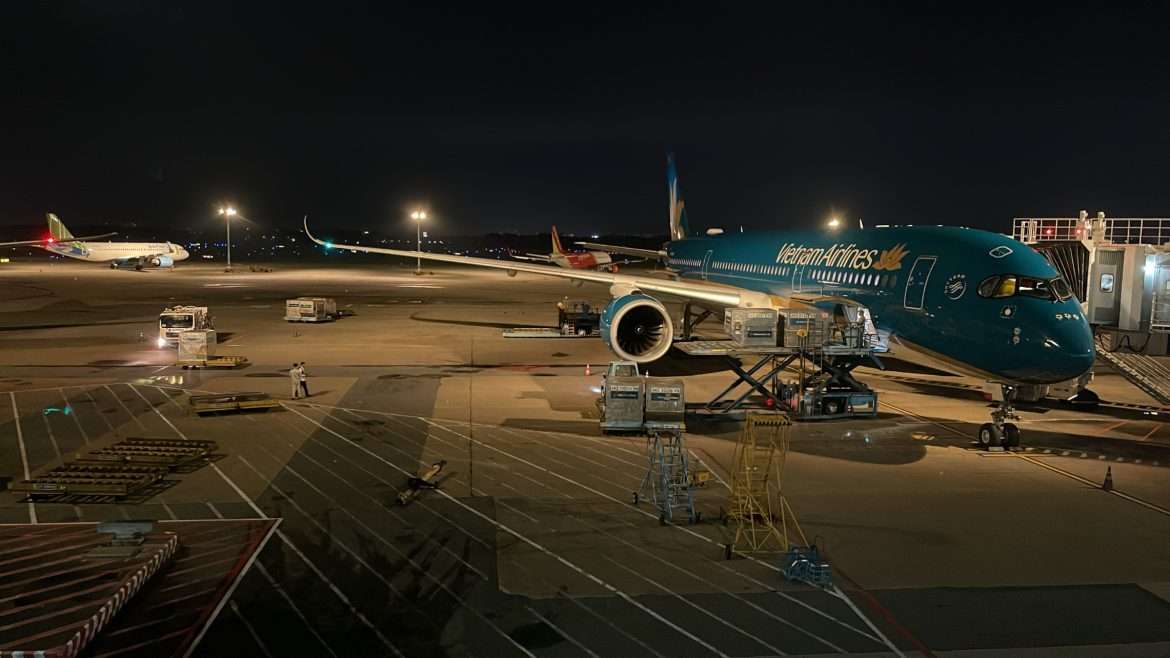 After going back and forth to find the temporary Vietnam Airlines lounge, it was finally time to board Vietnam Airlines A350. I went to the gate earlier than boarding time to be the first to board the aircraft. As I reached the gate there was already a long line in Economy Class but luckily only one family was waiting in the Business Class section.

I last flew the A350 on a domestic route from Hanoi to Ho Chi Minh City a few years ago. That 2 hours experience was too short for me so I was really excited to try on them on a longer flight.

Here’s a brief history of Vietnam Airlines’ A350 fleet. The company currently has a total of 14 Airbus A350-900s with two of the aircraft currently being parked.

Out of the 14 Airbus A350-900s deliveries Vietnam Airlines received, the first 4 feature the Stelia Solstys staggered Business Class seats and a Premium Economy in 3-3-3 recliner configuration. While the 10 others are installed with Safran(ex-Zodiac) Cirrus Reverse Herringbone seats and a 2-4-2 layout in Premium Economy class.

The main reason behind having different seats are due to delivery delays with the Zodiac seats. So to meet the delivery, a band-aid solution of installing staggered seats was made.

The A350 I took to Seoul featured 29 Reverse Herringbone seats in a 1-2-1 configuration plus an extra solo seat in row 8. For a solo traveler, I really like the single 8A seat at the back although there are some mixed reviews of this seat.

The greenish cabin of Vietnam Airlines was a little bleak but it was clean and the missing overhead bins over the center section made the cabin more spacious.

My seat, 8A was a single seat at the end of the Business Class section, in front of the second entry door. The Business Class seat has 21in (53cm) of width and 42in (107cm) of pitch, convertible into a fully flat bed with a length of 75in (190cm). The greenish-looking seat with a lotus flower sewn resembles the national flower of Vietnam.

It was impressive to see Vietnam Airlines providing amenity kits in Business Class while Korean Air does not.

Seats on the first 7 rows are less private due to seats next to them but thanks to the locker beside my seat, I had extra privacy. Not to mention the disadvantage of seat 8A. Since it was near the Premium Economy cabin, there is a galley that could be noisy during the flight with cutleries hitting each other.

A fixed armrest at the aisle side is a retractable armrest, which is stowed during boarding for ease of access to the seat while a second armrest nearer to the window is actually a storage space.

Aside from small personal storage spaces under the armrest, there are some more storage spaces in and under the footwell and a cupholder under the tray table stowage. Seat reclining functions, reading light, and IFE remote controller are all attached to the side console providing easy access to adjust.

In Vietnam Airlines magazine, there is a manual on how the Business Class seat functions.

A late dinner was served 90 minutes after takeoff and I had a Vietnamese Pho noodle for the main. The Pho was recommended by the crew and it tastes quite good similar to what you can find in local restaurants.

Before the main course was served, an after-takeoff drink with some light snacks was offered. Then an appetizer is followed by the main and dessert. The dessert was some local Vietnamese cuisine so I passed it and went straight to bed.

Seated in the last row of the cabin, I was the last to be taken orders with the remaining meals on the menu list. All the delicious-looking meals were taken, leaving me to choose either from fish or noodles. With regards to this problems, I found a way based on my experience so far. Here’s what you can possibly do if you are seated in the last row.

The crew member will generally approach you for dining preferences before pushback or while taxiing where you have to be seated. So once you board the aircraft, when you think every passenger has boarded, quickly approach the crew member and request your meal before it goes unavailable.

Vietnam Airlines’ in-flight entertainment is powered by Thales AVANT IFE systems with a 16″ touch screen display. Along with the touch screen display, a separate remote controller is attached to the side of the seat. The headphones are hung in open storage by the window.

A separate universal power socket and a USB port are available to use during the flight to charge your electronics. Note that Vietnam Airlines will turn on the power for the power socket only after take-off.

The contents of Vietnam Airlines’s IFE were really weak, to be honest. There were a couple of recent songs and movies but all in all, compared to its Skyteam counterpart Korean Air or China Airlines, the entertainment was not that satisfying. Instead, I turned on the interactive map the whole time to navigate here and there.

There are two lavatories located on the forward for Business Class passengers. One just outside the flight deck and the other in front of seat 1K. Lavatories are generally kept clean throughout the flight and amenities are restocked regularly.

Once again, I am back on board Vietnam Airlines’ flagship A350 to Seoul. 5 hours red-eye flight seems too short but the cabin service was really smooth and the food on board competes with different airlines operating the same route.

US$150 for an upgrade was definitely a hit with regard to cost and onboard experience. Vietnam has great Economy Class fares to various destinations and given the Business Class is not full, there should be generous Business Class upgrade offers from time to time.

Moreover, it was an amazing weekend in Ho Chi Minh City, spending time with my parents. It sucks to get back to work once I land but I am planning to do more weekend trips with different airlines soon.