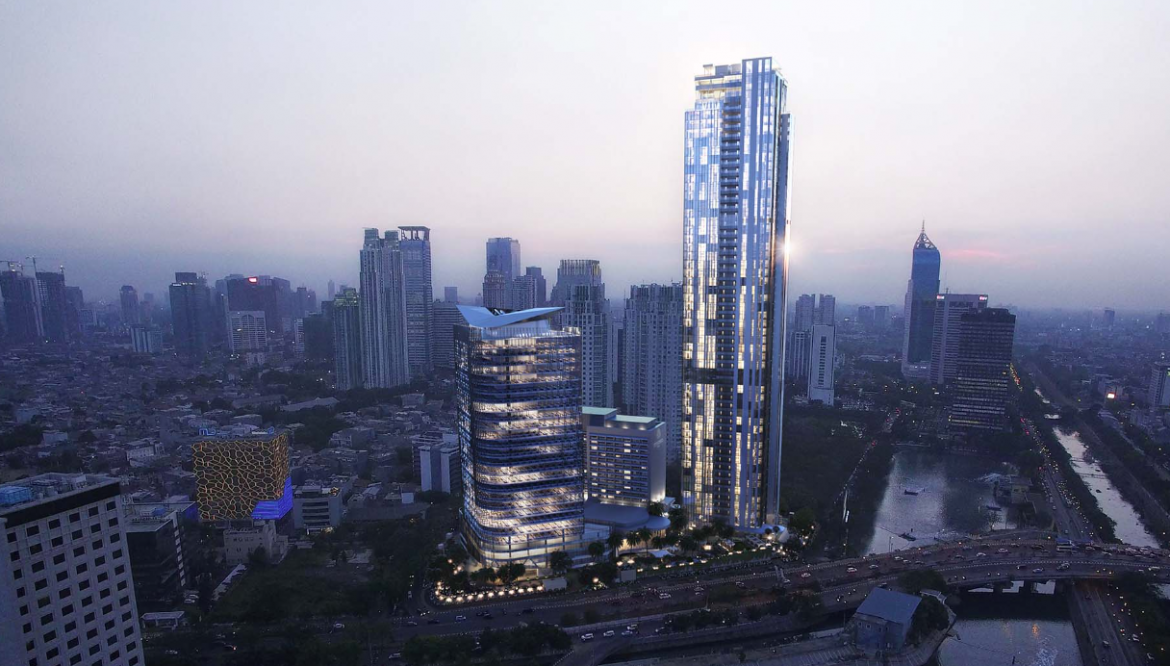 After nearly a decade of delay, Marriott has officially announced the opening of the second St. Regis brand in Indonesia: The St. Regis Jakarta this week.

Similar to the Park Hyatt Jakarta, The St. Regis Jakarta has a long history of delay and issues as it was initially planned to open back in 2012 but was delayed until 2016. Then, one time the property owner decided to replace Four Season Residences Jakarta which is built right beside the hotel.

After multiple twists and turns, the St. Regis Jakarta found a new site for opening in mid-2020 but after another delay, it finally opened its doors this Monday, December 5.

The St. Regis Jakarta is a multi-mix type property named Rajawali Place, the main owner, with the hotel, residences and office spaces gathered in two buildings. The main hotel will be located in a smaller building while the Residence will be adjacent to the hotel building. This hotel and residence building is similar to the St. Regis Bangkok where the hotel building features both hotel and residential areas, accessible through the side entrance.

The new St. Regis Jakarta is located in the heart of Jakarta’s Sudirman Central Business District or SCBD, a business district with an integrated mixed-use development concept, located South of Jakarta. The hotel is within walking distance of public transportation and within 10 minutes of malls (Grand Indonesia & Plaza Indonesia) and many restaurants.

The St. Regis Jakarta features 282 guest rooms, including 28 spacious suites ranging from 75 ~ 187 square meters or 807 ~ 2012 square feet, each featuring a private balcony. Since the hotel was renovated from a residential building, there will be balconies in most of the rooms.

As I search the rooms on the Marriott Bonvoy website, it looks like the highest category room is the “Caroline Astor Suite” and I cannot find a room that is higher than this. This is possible because of the layout of the hotel. I mentioned above that the hotel building used to be a residential building, more of an apartment/flat.

That is why there might be some difficulties to merge a couple of rooms to create a large suite.

Indonesia is one of the countries in South East Asia to offer lower rates at 5-star hotels. For example, the Park Hyatt Jakarta, which opened in August this year rates as low as US$250 per night for standard rooms.

In the case of St. Regis Jakarta, I am seeing a pretty much-fixed rate throughout the year. It costs around 4.7 million Indonesian Rupiah or US$300 per night for standard rooms up to US$538 for the suites.

Moreover, there will be a deli, a drawing room for afternoon tea and a St. Regis signature bar.

Other facilities such as a spa, indoor swimming pool and gym will be present though the details are still limited on the website itself. I would need to visit sometime in order to further review the on-site guest facilities.

After nearly a decade of construction and opening delays, the St. Regis Jakarta is finally open as of this week welcoming guests. I am particularly excited about this St. Regis since I am a huge St. Regis fan.

The St. Regis Jarkarta will be the second St. Regis hotel in Indonesia after St. Regis Bali and it will be multi-space property with the hotel, residential area and office spaces present across two buildings. The only probable downside is the categories of the rooms offered at the hotel. There are only three categories with one Deluxe and Grand Deluxe rooms and one suite category.

I am hoping to make stay at this hotel next month and experience the customer services provided by the hotel.