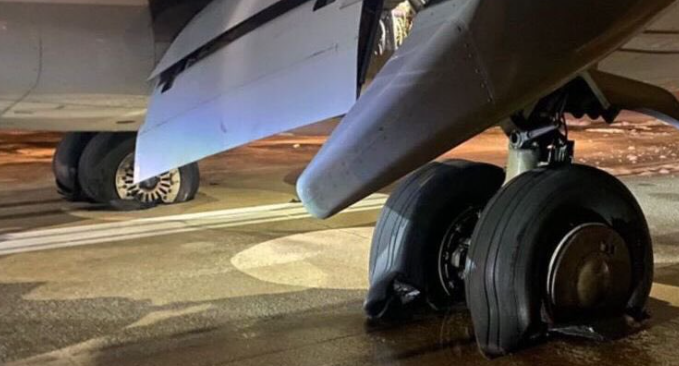 Earlier on Thursday, Turkish Airlines B737-800 (TC-JVN) was evacuated after multiple tires burst during landing. The aircraft was operating from Istanbul Airport (IST) to Antakya-Hatay Airport (HTY) in Hatay, Turkey.

The Turkish flight TK2256 departed Istanbul at 1:29 AM in the morning and was landing at Hatay around 3:16 AM. The flight had no issue but during landing, the incident happened. As the aircraft was landing, the six years old Boeing B737-800’s tires started to burst. As a result, the pilots made an emergency stop in the middle of the runway and proceeded with the passengers’ evacuation.

There were 104 passengers and six crew members who all evacuated via emergency slides. At the same time, emergency responders and vehicles were dispatched to the scene and immediately sprayed the foam on the landing gears to prevent fire.

As you can see from photos and videos surfacing on Twitter, both main landing gear tires blow up and caught fire.

After this incident, Turkish Airlines Senior Vice President of Media Relations, Yahya Üstün, made a statement:

“Our Flight TK2256 aircraft operating on the Istanbul (IST) – Hatay (HTY) route suffered a burst tire while landing. As a result, one of the landing gears of the aircraft experienced overheating, to which fire brigade on the scene responded promptly and ensured that it cooled down. Our passengers and crew were safely evacuated without any problems to their physical conditions.”

Currently, the aircraft is still on the ground for further inspection and maintenance.

Turkish Airlines B737-800 made an emergency evacuation on Thursday morning after multiple tires burst during landing. It is probably because the gear or brake disks got overheated which led to the blowup. But thankfully no one was injured both during the incident and evacuation.