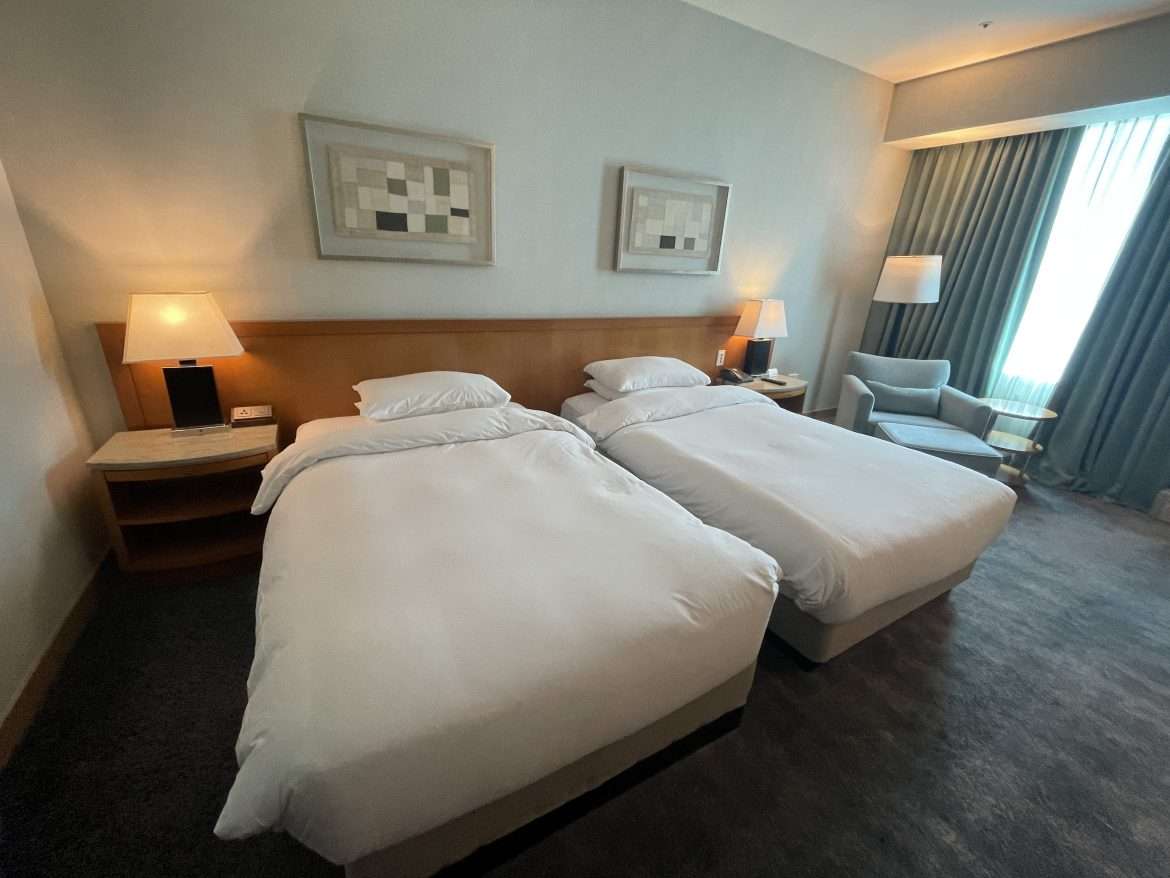 Grand Hyatt Incheon is one of my favorite Hyatt properties in Seoul, Korea. I have stayed here every time before departing Seoul to other destinations as it is convenient to the airport especially when my flight departs early morning or late at night. I have never reviewed the rooms at Grand Hyatt Incheon so this time I will review some of the rooms I have stayed in.

This week I had a chance to visit Grand Hyatt Incheon and stayed for two consecutive nights at two different towers. This is a two-part review. In Part one, I will review the Standard Twin Room at the East Tower and in part two, it will be about Deluxe Room at the West Tower.

Up until now, the East Tower was used as a national quarantine facility for COVID-19 patients who arrived from high-risk countries but as of June, the hotel disinfected and converted the rooms back for regular guests to use.

Grand Hyatt Incheon it’s one of the largest hotels in Asia, housing up to 1022 rooms and suites. It is the 41st Grand Hyatt property to be built and the second after Grand Hyatt Seoul and its owner is Hanjin KAL who is the owner of Korean Air. This massive hotel is divided into two towers: East and West Tower respectively. I will go over a brief history of Grand Hyatt Incheon.

The hotel was first opened with only the East Tower with 522 rooms as Hyatt Regency Incheon but a decade later, in 2014, with the completion of the West Tower housing additional 500 rooms, the hotel was renamed Grand Hyatt Incheon. This was to accommodate tourists and players for the 2014 Incheon Asian Games as Korea was the host nation.

Due to the current situation, the East Tower is mainly used by foreigners who are for a convention in Korea, foreign short-term tourists and airline crew members. While the West Tower is dedicated to long-term staying foreigners and Korean locals. On Hyatt’s websites, only rooms on the West Tower are currently available for booking while the East Tower needs to be booked by calling the hotel’s reservation department.

As you enter the main lobby, the check-in desks are located on the right, down by the huge hallway. As this tower was built in 2003, you will notice the design of the hotel is a combination of dark wood tones with royal yellow marble tiles which gives you an old-style feeling.

I went to the hotel right after my work so there were large groups of crew members from Emirates and Qatar Airways checking in. After a long wait for check-in, I was assigned to room 940.

The last time I was in this room was almost three years ago. After all the years, nothing has changed except for the bathroom amenities. The standard room features 36sqm or 387sqft of space and offers relaxation with comfortable interiors and bedding.

The room is kept up to date while I saw some aging with the drawers and wardrobe, it was not that of an issue for complaint. The only problem was the bathroom. In this room, there seems to have an issue with the drain and no matter how less I turned on the water, it kept overflowing. Next, the shower head was broken and it was facing downwards all the time.

Breakfast is served at Restaurant 8 located on the ground floor in the East Tower. This is the only main restaurant at Grand Hyatt Incheon so both guests staying at the East and West Tower rooms will have breakfast at Restaurant 8.

To those who are staying at the East Tower, you will just have to come down by the lobby and get breakfast but every other guest staying at the West Tower is quite a burden to walk all the way passing the sky bridge to get to the restaurant in the morning.

Restaurant 8 offers a wide variety of breakfast options from American to Asian and it is my favorite restaurant as well. Not only breakfast but also lunch and dinner buffets are amazing too. Also, the restaurant caters buffet to Korean Air lounges at Incheon Airport so you will find the same dining menus here and there.

There is a Vy Bar & Karaoke in the East Tower but as of now, it is temporarily discontinuing its operation. Instead, drinks and light meals are provided a variety of à la carte and set menu items from Restaurant 8 or Swell Lounge(Located on the West Tower) at this time. The bar has plenty of seating with a bar in the middle and separate open and private seatings with partitions.

The East Tower features fewer facilities compared to the West Tower as the fitness center and swimming pool is all located at the West Tower. On the first day at the East Tower, I did not visit these facilities since I was lazy to walk all the way back and forth to the opposite tower. Instead, I experienced Restaurant 8 for all three meals, from à la carte menus to the buffet.

In my opinion, if you prefer the rooms that are modern, I’d go for the West Tower while the rooms in East Tower feel more antique and darker. You can check out the differences in the next part of my stay at the Deluxe Room. Both towers have their own advantages such as ease of access to certain hotel facilities.