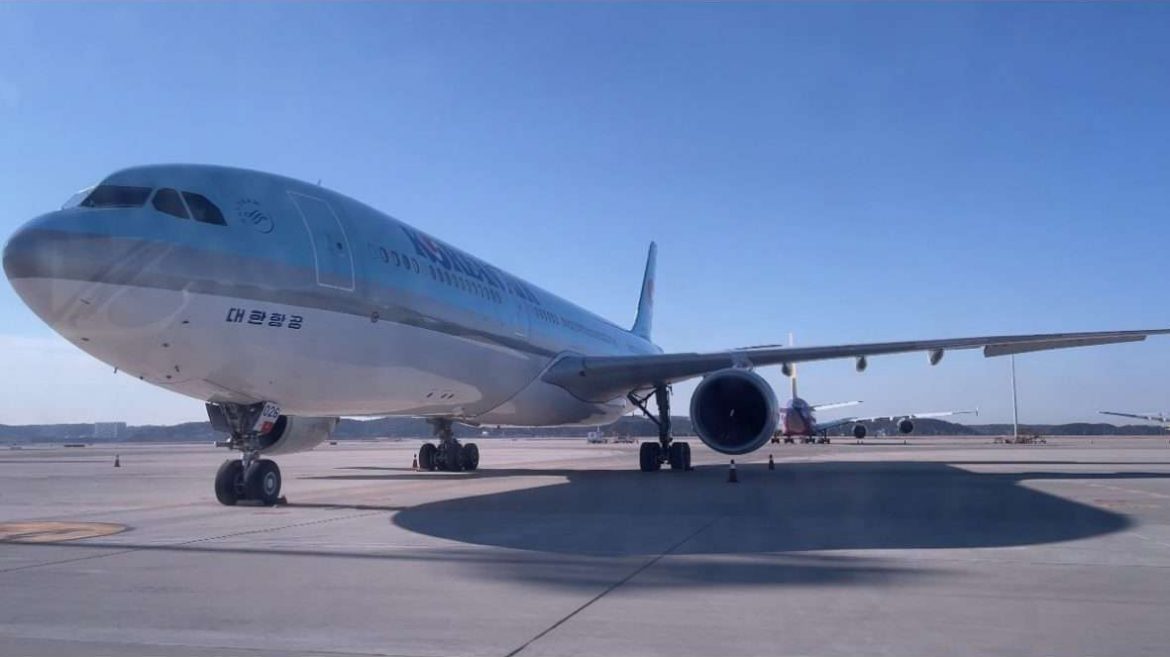 Korean Air recently suffered continuous accidents and issues with regard to its Airbus A330 aircraft. And last week, yet another engine-related incident occur with the A330.

Korean Air A330 Had an Engine Issue Midflight

On December 22, 2022, a Korean Air flight KE42 flying from Seattle to Seoul/Incheon suffered an engine abnormality issue on the No. 2 engine. The aircraft was reaching the city of Pohang, South East from Seoul when the pilots notice a message from the Engine Indicating and Crew Alerting System or commonly known as EICAS.

With the alert, the pilot on the flight stopped engine No. 2 according to the relevant procedure. Therefore, the aircraft ended up operating with the No. 1 engine only and arrived at Incheon International Airport about 40 minutes behind the scheduled ETA.

There were a total of 215 passengers including 12 crew members however no one was injured during this incident. The aircraft, upon arrival, was sent to the Korean Air Maintenance facility for possible engine defects and maintenance measures were taken.

The aircraft involved in this incident is a 12 years old Airbus A330-200 series with a registration number of HL8227. I have flown the same aircraft a couple of times in the past without an issue. But I guess the pandemic and long-term parking might contribute to engine issues.

This is the third time Korean Air is experiencing issues related to the engine since August. Back in August, the airline made an emergency landing in Baku, Azerbaijan due to an engine sparking and on October 30, KE401 bound for Sydney (SYD), diverted back to Incheon after takeoff due to engine sparking.

As the A330 engine-related issues continue, South Korea’s Ministry of Land, Infrastructure and Transport (MOLIT), similar to DOT, planned to improve safety management by conducting a two-week special inspection of Korean Air.

Korean Air uses two different versions of Pratt & Whitney engines on the A330s – PW4168 and PW4170 series. Both engines are similar except for a slight difference in thrust.

With the oldest active A330 on the airline was delivered in 1999, the engines are relatively old, even though they are maintained well. I’m not an engine expert but a couple of factors could contribute to the recent engine-related issues.

Korean Air To Phase Out 6 A330s, 24 Will Undergo Inspections

“We are taking it very seriously that the A330 aircraft has recently returned due to engine problems, including the accident at Cebu Airport. We will conduct a special safety inspection on the A330 model. We will suspend the A330 fleet sequentially for special inspection.”

He also added that:

“We plan to phase out six of the 30 A330s currently owned and suspend the rest sequentially to divide 24 aircraft into five for intensive special inspection.”

After two weeks of special inspection of Korean Air and Asiana Airlines’ Airbus A330 engines, microcracks inside the engine have been confirmed in 21 of the 39 aircraft from both airlines. The South Korean MOLIT plans to immediately suspend aircraft with serious cracks that are out of operational limits, and continue repeated precision inspections on other aircraft.

The MOLIT announced 10 Korean Air and 11 Asiana Airlines A330s installed with PW4168 and PW4170 engines were found to have micro-cracks in internal parts of the fourth-stage low-pressure turbine blade seal. Below is the diagram of the engine and the location of the defect pointed by an arrow.

The part where the fine cracks were found is the part where the manufacturer’s manual does not normally provide inspection standards. An engineer from Pratt & Whitney visited Korea to check the inspection results, and the FAA also reviewed the crack tolerance and the need for follow-up measures and notified both airlines and the MOLIT of the results.

One Korean Air A330 was immediately grounded as it exceeded the allowed range of cracks set by the production authorities. The remaining 20, which have cracks but are within the allowable range, are subjected to precision inspection every 85 flights or 1.5 months.

Korean Air has undergone a tough season for its Airbus A330s with multiple engine-related issues as well as the most notable incident which happened back on October 23 when the company’s A330 crashed after landing at Cebu-Mactan International Airport.

Since then, Korean Air and the South Korean Ministry of Land, Infrastructure and Transport (MOLIT) took action to prevent further engine issues with two weeks of special inspection for all A330s operating by Korean Air and Asiana Airlines(Which will be merged with Korean Air in the future).

The result was shocking as out of 39 A330s, 21 had found a micro crack at the 4th stage low-pressure turbine outer air seal. A minor crack on an aircraft could possibly lead to a major accident so both companies have taken action to inspect the aircraft every month.